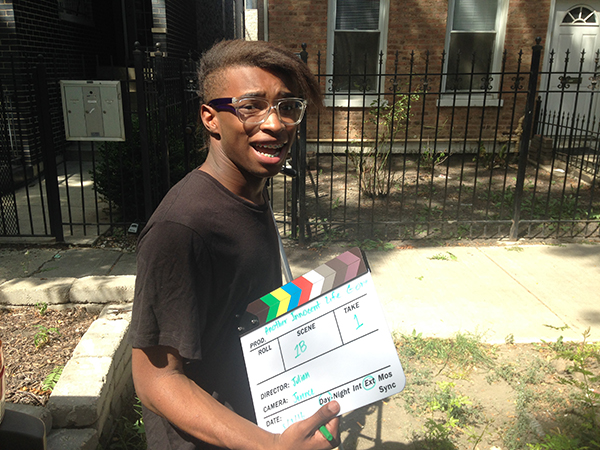 Jerence Rambo will be starting his final year at Wells Community Academy High School with another title other than senior.

The 17-year Austin resident can add “screenwriter” to his resume.

After attending a six-week film-making course through After School Matters, Jerence was one of three students whose scripts were chosen to be turned into five-minute short films.

Loosely based on AustinTalks, the film chronicles a young female journalist living on the West Side and her attempts to prove to her parents that reporting can be a full-time career.

The film, titled “Colors,” will premiere 6:30 p.m. Wednesday, Aug. 17th at The Logan Center for the Arts at the University of Chicago.

Jerence said he always wanted to be a filmmaker, pointing to famed screenwriters Max Landis and Simon Kinberg as inspiration.

An avid comic book fan and all-around movie buff, Jerence said while having lunch with a teacher he was introduced to Dane Haiken, program director at Full Spectrum Features, a non-profit organization whose mission is to increase diversity in media arts by working with minority and women filmmakers.

After speaking with Haiken, Jerence applied to the program, was accepted and started attending classes in July.

After School Matters partnered with Full Spectrum Features to teach a select group of 11 students the principles of story development, writing and directing.

“As someone who watches movie interviews in my free time, being able to see the ins and outs of movie making has been a great experience,” Jerence said.

Students were first tasked with researching their local neighborhoods to find story inspiration. Next, they were taught the basics of script writing and separated into three groups to critique each others’ work.

It was during this process that Jerence discovered the AustinTalks and was inspired to create a story using the six-year old news site as a reference.

“The first time around, it took me about five hours to write out the whole story. I just needed to get it out of my head,” Jerence said.

His family couldn’t be prouder.

“We have always been a supportive family unit and are extremely excited about everything he has accomplished,” Jerence’s older sister, Dia Rambo, said. “When he’s older and a famous director he’s going to look back on this and say, ‘That’s when it all started.'”

Like all programs at After School Matters, students ages 14 and up must apply online and go through an interview process to participate. (Applications are being accepted now for the fall cycle, which starts the week of Sept. 26th.)

“The goal is to provide teens with activities outside of school, to give them a rewarding summer with monetary value,” said Jabriel Martin, an assistant at After School Matters, noting the students in this program were paid $420.

“It was my first summer job, and it was doing something I love, so it was perfect,” Jerence said.

Few get the opportunity to write a screenplay let alone get first hand knowledge on how to direct a film. Another thing Jerence will also get to experience that most writers do not: seeing his work in a theater.

“It was important to me that these students got the chance to see their film on the big screen, that’s why we chose The Logan Center,” Haiken said.

Jerence said he’s most excited about seeing how his friends and family react to his film.

“I’ve waited for this moment for 16 years, and it’s finally happening. I couldn’t be more excited.”