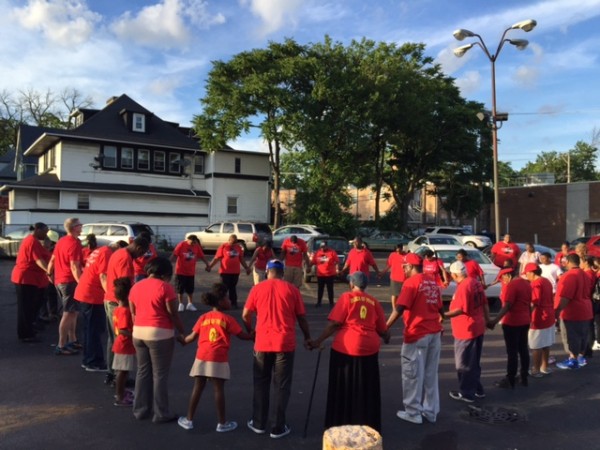 Tonight – as they do every Wednesday at 6 p.m. this month and next – members of Hope Community Church will gather at Central and Chicago avenues to take part in the annual faith-based initiative “100 Blocks and 100 Churches.”

Rev. Dion Lewis, 55, has been wearing red in support of the initiative for over five years. The event has expanded from one month to two since 2010, the first summer West Side residents started showing their community unity by standing on corners throughout Austin.

“This year, people began honking right away; they know this is our corner,” Lewis said.

Roughly 40 members of Hope Community Church gathered earlier this month to join dozens of others standing at corners across Austin to “send a message to those in the community that are part of the problem,” according to one of the organizers, the 15th District CAPS.

During the hour-long gathering June 8th, some Chicago Police officers also stopped to stand with residents.

Constance, 47, who didn’t want to give her full name, said, “We pray for peace. There is power in numbers.”

Though she hasn’t personally experienced a loss due to gun violence, Constance said she’s seen its effects on her community.

Signs that read “unity in the community” and “put the guns down” were held by both young and older residents. Those driving by often respond to the signs by honking their support.

“For some, it’s an hour of peace on this corner; every minute counts,” Lewis said.

Here’s how AustinTalks has covered this event each summer:

100 Blocks and 100 Churches will continue through the month of July starting at 6 p.m. You can check the 15th District CAPS calendar here for more information.