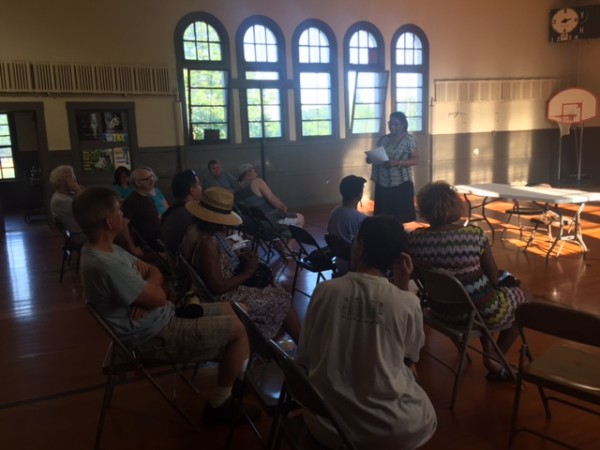 A 29th Ward community meeting was held last week at Rutherford Sayre Park where Austin residents were able to raise concerns about the neighborhood.

Ald. Chris Taliaferro was not present due to conflicting events but his chief of staff, Pam Moore, was there to field questions from the audience.

“My main job it to inform the residents about what is going on in City Hall,” Moore said.

Although a light audience of only 12 residents were present, they brought up a few shared concerns.

“People spoke a lot about tree trimming,” Moore said. “The city has been behind two years, now were are about a year and a half.”

Moore said a common complaint was about the city’s handling of dead trees not being picked up.

“City workers will ignore a dead tree sitting next to one they just trimmed,” she said. “So we are working to get that fixed.”

Moore said she wanted to answer as many questions as possible but avoided responding to questions she didn’t know the answer to.

“I want to make sure I’m giving accurate information, but if I can’t answer a question I will inform the aldermen immediately,” she said.

One resident spoke up about a local hookah shop on the 2900 block of Harlem Ave. that he noticed seemed to be attracting people after hours.

Ronald Sak, 61, who lives in the near by 36th Ward said, “Gangs sometimes turn (vacant houses) into cook houses; they are safety hazards.”

According to data located on chicagobuildings.org which is compiled from the 311 reporting service, there have been 62 vacant or abandoned buildings reported in Austin since July 2015.

The data also states that since Jan 1, 2010, there have been 18,949 vacant buildings reported in the city of Chicago. On average, 19 new buildings are reported every day.

“Vacant properties ruin the image of the neighborhood,” said Robert C. Hansen, 58, who has lived in Austin since 1985. “Just take a look down Harlem Ave, they’re everywhere.”

The next community meeting will be held July 6th at 6:30 p.m. at the Columbus Park Refectory. For more information, check the 29th Ward calendar here.