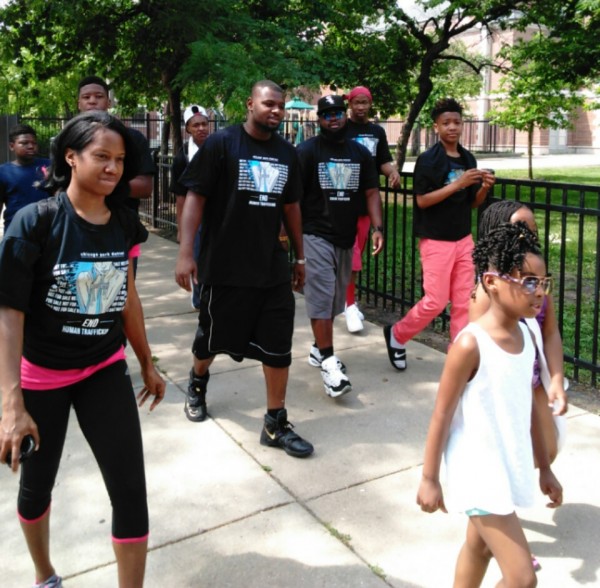 Youth across the city marched earlier this month in Austin and other neighborhoods to put the spotlight on human trafficking.

The Chicago Park District-sponsored teen walk took place June 17th at neighborhood parks across the city; Austin Town Hall and Columbus Park were among those participating.

About a dozen youth and adults walked from the Austin Town Hall north on Central Avenue to Chicago Avenue before heading west to Parkside Avenue. The group continued south from there before returning to the town hall on Lake Street.

“We’re just trying to promote awareness of human trafficking,” said Donte Givan, a physical education instructor at Austin Town Hall. “It’s something that’s been growing in frequency, but not a lot of attention has been given to it.”

Davonte Dudley, 14, who graduated earlier this month from Duke Ellington Elementary School, was among the Austin Town Hall participants.

“We’re protesting the violence,” said Davonte, who’ll be attending Al Raby High School in the fall. “We’d like people to know that we’re not just out here promoting the violence and gang-banging. We’re trying to make a change.”

The walk also put a focus on protecting young girls in the community, who are the most common victims of human trafficking, noted Jonathan Cooper, a physical education instructor at Austin Town Hall.

In 2015, one in five of the nearly 12,000 runaways reported to the National Center for Exploited and Missing Children were likely trafficked for sex.

“This is a big topic, especially among the young girls,” Cooper said. “We want the kids to be aware of all of the issues in our community, not just the gun violence. There are a lot of issues outside of that, too.”

Given, an Austin native, said the town hall organized a human trafficking seminar last year where the kids really learned a lot.

“A lot of young girls are being prostituted and taken away and sometimes put in a predicament where they really can’t get out,” he said.

More young men than women participated in the walk, something Cooper and others acknowledged as a welcome sight.

“As black men, we don’t support each other as we should,” Cooper said. “We don’t encourage each other like we should. It should be self-motivation and bringing one another up.

“Like, I tell Donte that I’m grateful to have him as a mentor and, ‘I love you like a brother’ and ‘Good job’- stuff like that,” he said. “We don’t say that man to man because we think that’s making you soft and all that, but that’s not the case.”