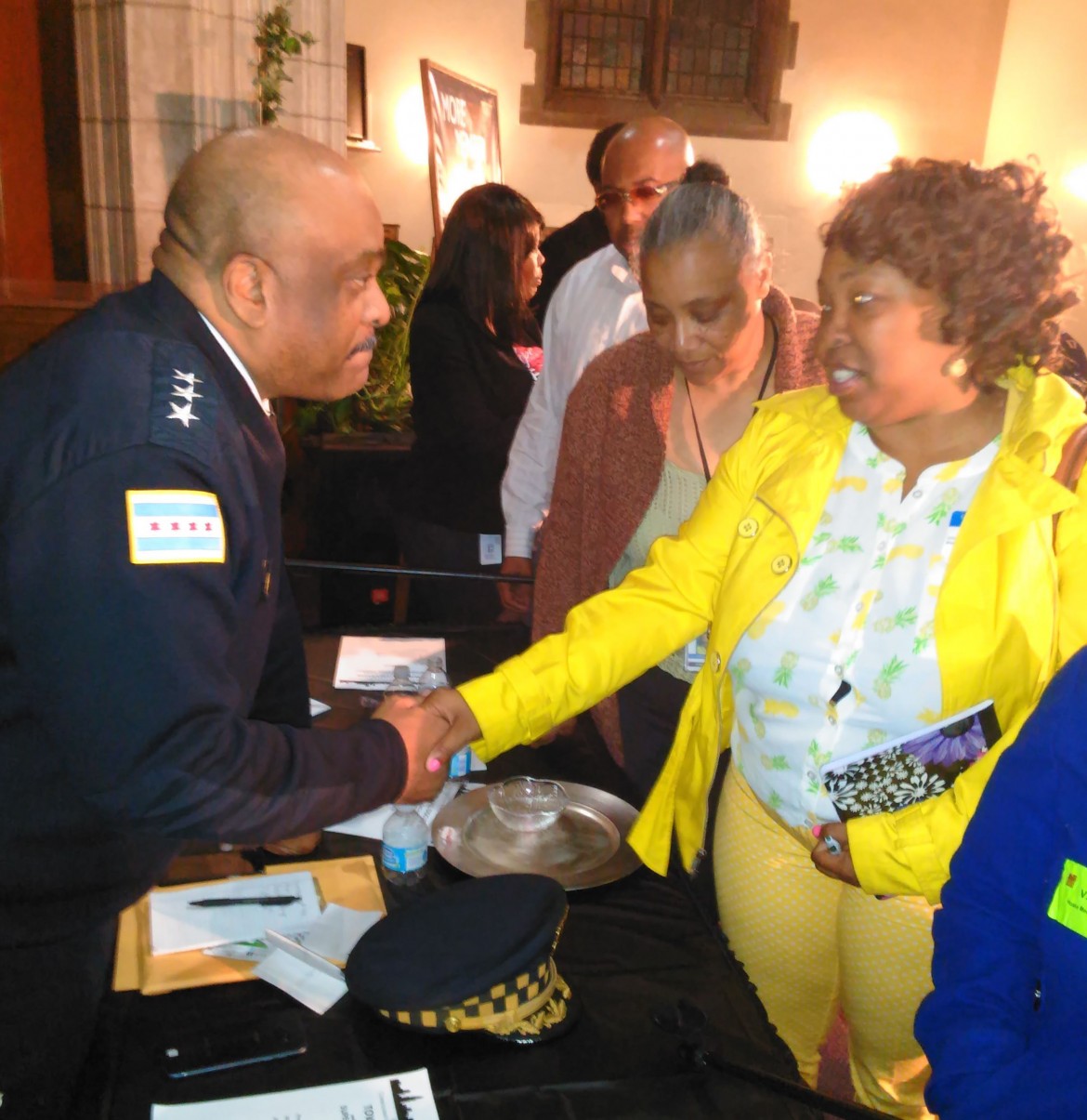 Chicago Police Supt. Eddie Johnson told a passionate yet restrained audience at Hope Community Church Wednesday that he will make the police department better and restore trust with the city’s black community.

Johnson told the crowd of roughly 200 that changes won’t happen overnight but this is the time to get those changes moving.

“I pledge to you all that I will do everything that I can to restore your faith in the police department. I give you my word on that,” Johnson said.

The superintendent added that he’s done “a lot of listening” throughout communities in the city since his appointment by Mayor Rahm Emanuel in March.

Johnson received an earful from many attendees at Wednesday night’s town hall, which was hosted by Ald. Chris Taliaferro (29th) and Cook County Commissioner Richard Boykin (1st). Other media outlets were kept out of the event, the Chicago Sun-Times reported.

Just moments before the event started, a shooting took place just blocks away from the church on Augusta Avenue involving a teenage victim who was reportedly wounded.

More than 1,100 people have been shot and nearly 200 killed by gun violence so far this year, according to a Chicago Tribune analysis. Wednesday night’s shooting, which was mentioned by some at the event, brings that total to about 1,144.

The Chicago Police Department and Mayor Emanuel has faced blistering criticism for the city’s rising gun violence, as well as civilian shootings of unarmed African Americans by police.

The release of the Laquan McDonald video via court order last November touched off that criticism, Johnson acknowledged.

“We know what happened when the Laquan McDonald video came out. We had a series of events occur after that, which ultimately gave rise to me being here tonight,” Johnson said, acknowledging that police have mistreated some within the black community.

“If we’re going to fix this thing, I have to be able to acknowledge certain things about the way we do business, because if we don’t, we’re not going to be able to correct them,” Johnson said to applause and cries of “that’s right!”

Johnson, a 27-year police veteran, was chosen as the city’s top cop on March 27., replacing Garry McCarthy, who was fired by the mayor in December.

Officer Jason Van Dyke, who shot McDonald 16 times during a street confrontation on Oct. 20, 2014, faces a murder charge. But that charge came more than a year after the shooting, handed down by Cook County State’s Attorney Anita Alvarez Nov. 24, 2015, the same day the video was released by a judge’s order.

The fallout from the video also cost Alvarez her job. The two-term incumbent lost her reelection bid in a landside to attorney Kim Foxx in the March 15 Primary.

At Wednesday’s town hall, Johnson addressed the well-known but rarely publicly acknowledged “blue wall of silence” within the police department. Creating a culture where good cops can call out bad cops without feeling ostracized is among the changes Johnson vowed to make.

“Most good cops don’t like when bad cops do bad things because we’re all painted with that brush,” he said.

The superintendent also addressed racism that exists among some officers.

“Those that choose to engage in that kind of behavior have to check that racism at the door,” Johnson said, adding, “If they don’t, they will be held accountable for it if their actions are inappropriate.” 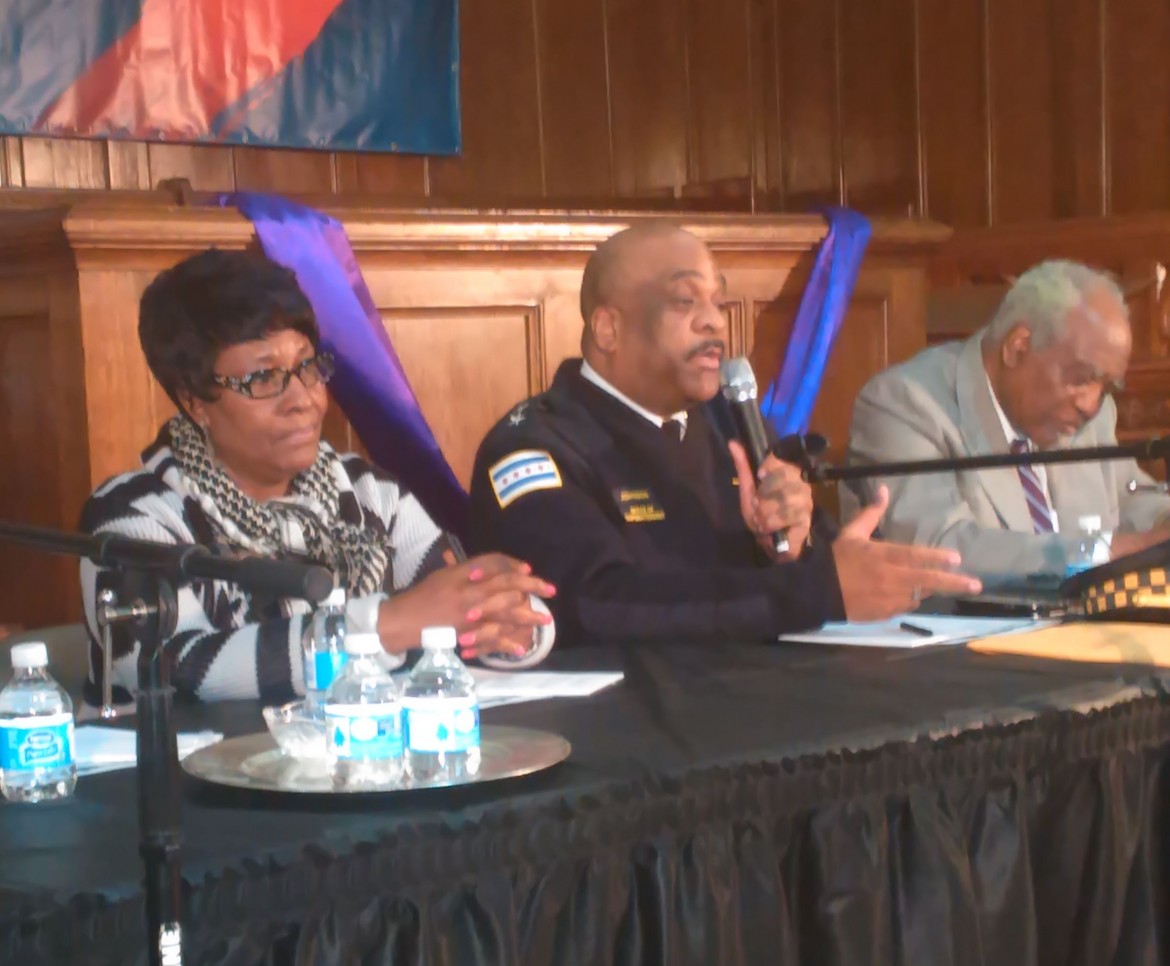 But despite the applause and well wishes of some, many want change now.

Shapearl Wells demanded the release of all video and 911 calls in police possession concerning her son 22-year-old son, Courtney Copeland, whose March 4 shooting death by an unknown killer remains unsolved. She also presented Johnson with more than 1,700 signed petitions in support of releasing that information.

“From Jan. 1st until today, we have 196 dead; one of those 196 is my son,” said Wells, who also wanted to know what Johnson planned to do about CPD’s “culture of silence.”

Johnson said his department needs to be more transparent and that police departments nationwide need a better system to release videos and 911 calls much sooner.

Other speakers claimed to have been unfairly victimized by Chicago police.

West Side resident Catrina Singletary said her son, Chris, has a court date next week for a bogus charge of trying to rob an off-duty cop. Singletary said she spent $20,000 to bond him out of court.

“Every kid that lives on my block is not a Gangster Disciple, ” she said. “But because you stop a kid and right this down about that kid, as soon as something happens, ‘Oh, he’s gang affiliated.’ No, he may not be. But because they put him in that category, that’s what they are.”

Johnson said he understood where Singletary was coming from.

“I grew up in this city. I raised a son in the city of Chicago. He’s 24-years-old, a college graduate. But it concerns me if he comes in contact with police that he’s going to be treated appropriately.

“Those are the thing we have to address because if officers are out there acting like that, we will never resolve this issue,” the police chief said.

Clifton “Booney” McFowler, a street interventionist with anti-gang Austin-based organization BUILD, said he had a run in with police earlier that day.

McFowler said he was talking with some kids in the neighborhood when a police officer drove up and accused him of trying to sell drugs. McFowler said he wasn’t arrested but was cited after being placed on the hood of the squad car and frisked, even though he said he didn’t consent to that.

“How can we stop this?” he asked Johnson. “In my field, I’m doing the same thing you’re doing, trying to save the lives of our kids. So I think I should at least be able to walk down the streets without them throwing me against the car, going in my pocket and having me afraid to even approach the kids.”

Not everyone, however, was sold on Johnson’s promises.

“I wanted the process to work out. You got a committee, let ’em do they job and pick the best person, but that was just a scam,” Gray said. “This guy didn’t even apply for the position. [The mayor] had already made up his mind. He wanted it from the inside.”