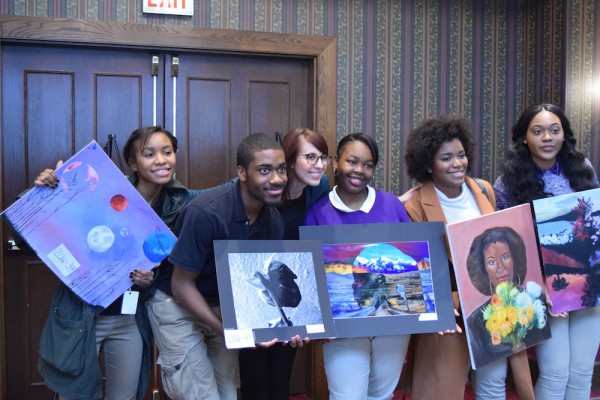 U.S. Rep. Danny Davis proudly addressed the room full of students, parents and teachers who gathered April 29th to celebrate the arts – and all those who worked hard to create the pieces on display.

Davis quoted Whitney Houston’s The Greatest Love of All and called the room full of children “our future” who deserve a sense of pride for what they’ve accomplished.

“And [a sense of pride is] what you give all of us as we display all the work you’ve done,” Davis said.

In her opening remarks, Annetta Wilson, executive director of Sankofa Safe Child Initiative, acknowledged the hardships many of the students faced this past year, mainly due to Chicago’s financial stalemate, which, in turn, caused many public schools to suffer.

“This year you have had many challenges, but you continue to rise,” Wilson said.

Arts programs have been a target for quite some time.

Three schools lost their arts programs this year, she said, and it saddened her that some students would never get the opportunity to take an art class. A few students who participated in this year’s competition attend schools with no arts program.

“The work that you all produced this year, with all the things that are going on around you, brings me to tears today,” Logan said.

Teaching is one of the most noble professions, Congressman Davis said, and part of the art competition was dedicated to honoring all the teachers present in the room.

“Putting this year’s art competition together was a lot,” Logan said. “The teachers worked really, really hard to pull out the students what they had in them.”

Also in attendance: Susan Goodenow, vice president of branding and communications for the Chicago Bulls, one of the sponsors of the competition. Other sponsors included the Shedd Aquarium and Southwest Airlines.

“Art has a place in so many organizations, even ours,” Goodenow said. “Art really has a special power, it makes you think.” 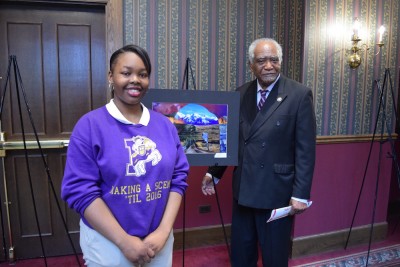 The first-place winner was Rachel Abraham, a senior at Providence St. Mel who created a self-portrait with images of nature that she titled “Dreams.”

“I think of myself as a dreamer, my head is always in the clouds,” Abraham said.

Abraham, who hopes to study biology at Bradley University, said she used her digital art piece to reveal a part of her personality and her thoughts about society.

The second- and third-place winners were Grace Fox from Oak Park and River Forest High School and Terrence Billups.

Fox, who also created a self-portrait, used typography to create an image of herself with her camera. The words making up her body frame were pick-up lines, which she says reflects her type of humor and her fun personality.

“It really impresses me, the quality of her work and her dedication. She works really hard at it and everything she does.”

Abraham’s first-prize winnings included a laptop and a trip to Washington, D.C., to compete in the national art competition later this year. She will face students from congressional districts across the country. The other winners also received laptops and Bulls tickets.

The art caught the eye of buyers who wish to publish the students’ work. Before the competition, their work was displayed around the city, including at the Thompson Center, and gained the attention of buyers and business owners who want to give the students a chance to profit from their work.

“The public was amazed,” Logan said.

Davis wrapped up Friday’s event by encouraging all of the students to keep fighting for and following their dreams.

“Keep dreaming, never give up on your dreams,” Davis said. “I’d rather have a dream and not fulfill it, than to fulfill no dream at all.”