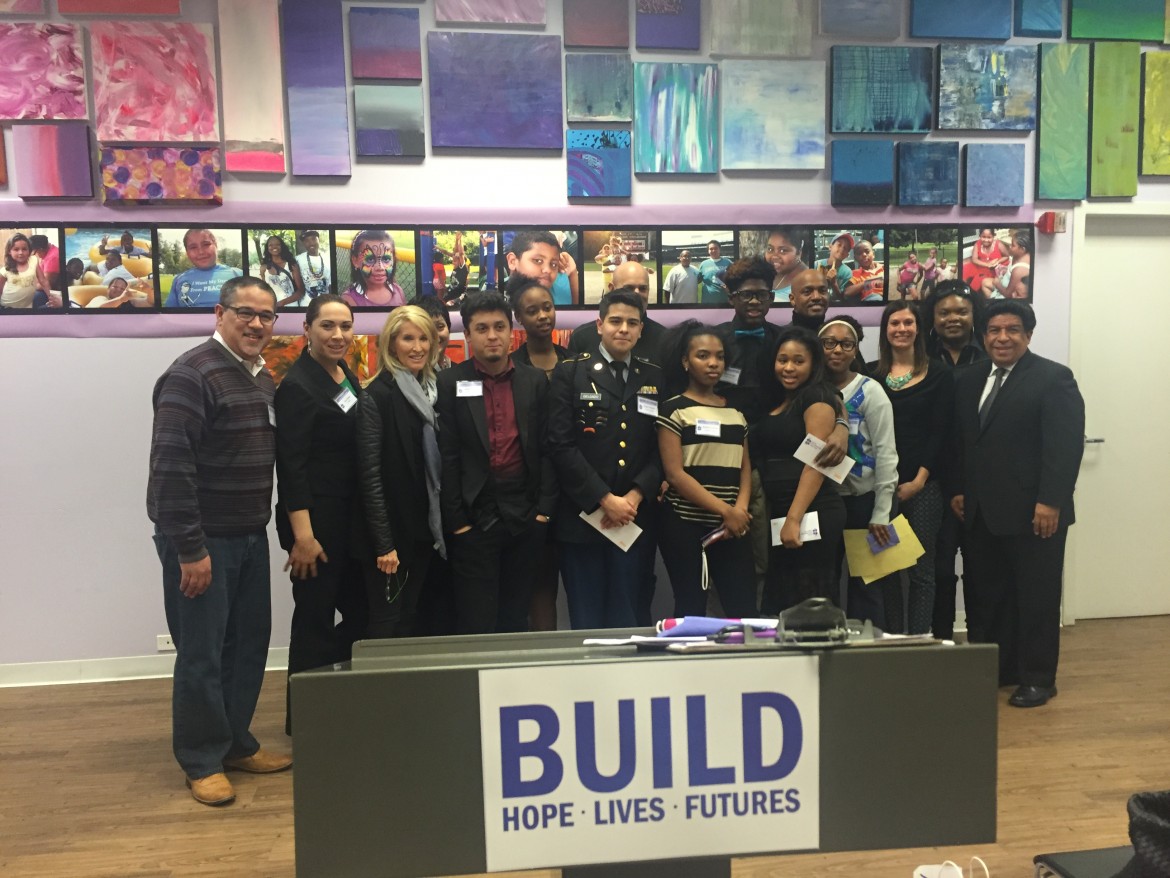 Audience members at BUILD‘s 2016 public speaking contest watched in amazement as seven young contestants took to the podium to share their personal stories.

The goal of the annual competition is to give students exposure to professional speaking to help them develop the ability to speak competently for college and job interviews, said Pat Spratt, a Circuit Court of Cook County judge.

“It puts them on a level playing field with young people who come from much more privileged backgrounds, so that they have the same opportunity to get into that school or to get that job,” said Spratt, who’s also a BUILD volunteer.

The students shared stories of personal struggle, abuse, violence, neglect – and how they’ve overcame those obstacles.

This year’s winners were Shaunteese Parker (3rd place), Zykia Pearson (2nd place) and Diego Delgado and Khalil Wright, who tied for 1st place. The received college scholarships ranging from $1,000 to $250.

Delgado, a 19-year-old senior at Kelvyn Park High School, expressed his gratitude to BUILD, an organization he says has helped him grow so much. He hopes to attend Governor’s State University.

“I feel very thankful for BUILD for giving me this money. But it’s not about the money; it’s the opportunity they gave me – the encouragement – to keep on going, to not give up and to strive for excellence,” Delgado said.

Fifteen-year-old Zykia, a student at Leif Ericson Scholastic Academy, shared a story that stunned many in the audience.

The contest was the first time she’d told her story to anyone, including family who still don’t know what happened to her. And that made the experience challenging, Zykia said.

Despite the hard things she has experienced, she tries to stay positive, she said.

“I’m always keeping a smile on my face – not trying to show the hurt,” she said. “I use music to express my feelings.”

Zykia is also a singer, and uses singing express herself and stay happy.  The Juilliard School hopeful concluded her speech with a song that moved fellow contestant Khalil to tears.

Khalil, a 15-year old sophomore at Wendell Phillips Academy, said he was a little tense before sharing his story, but he built up the courage to share his experience.

He, too, credited BUILD with helping him gain the courage to express himself and step out of his comfort zone.

“BUILD helped me be a better me and made me want to take more risks and tell my story,” Khalil said.

The most enjoyable part of being in BUILD is making new friends and doing new things, he said.

Shaunteese, a 14-year old who also attends Wendell Phillips Academy with Khalil, says she enjoys the opportunities that BUILD provides and  sharing her story in the competition was a relieving experience.

“It feels great because I usually hold that kind of stuff in, so it feels good to let it out,” she said.