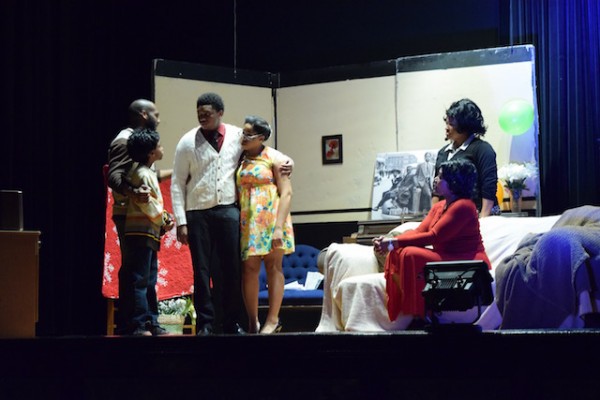 Audience members traveled back to the 1950s at the recent three-night performance of “Of Quiet Birds,” a play about the struggle for equality during the civil rights era.

“This play represents how far we’ve come – and how far we have left to go,” said playwright Loretta Hawkins.

The story revolves around a 17-year-old girl named Cora Lee as she struggles to find her identity in a world that is against her because of the color of her skin.

She desperately longs to participate in the civil rights movement led by Dr. Martin Luther King Jr., but her parents adamantly oppose her involvement because they fear for her safety.

Jamie McDonald, who gave a moving performance as Cora Lee, said her character represents all of those who still fight today for equality. Some of the issues from 60 years ago still linger today, she said.

“I hope that [people] recognize how relevant the play is and how much things have changed, but how much they really haven’t,” McDonald said.

This month’s performances – held at Austin Town Hall – were the third time the play was put on since it was written in 1993. Hawkins’ daughter, Dionne Hawkins, produced and directed the performances.

Inspiration for the story came from a poem the elder Hawkins read by Dudley Randall titled “The Ballad of Birmingham.” The poem is a reaction to the 1963 bombing of 16th Street Baptist Church, where four little black girls were killed.

Both of the Hawkins hope people walk away from the play feeling inspired. Even one person can make a difference, said the director, just like the character Cora Lee.

The playwright said white people have been just as instrumental in the progress toward equality, and her message is not one of hatred despite the play’s portrayals of black suffering at the hands of whites.

“I hope [people] understand that when we speak of progress, we’re not speaking of hatred against any group,” Loretta Hawkins said. “People are not defined by their color. There are good people — black and white.”