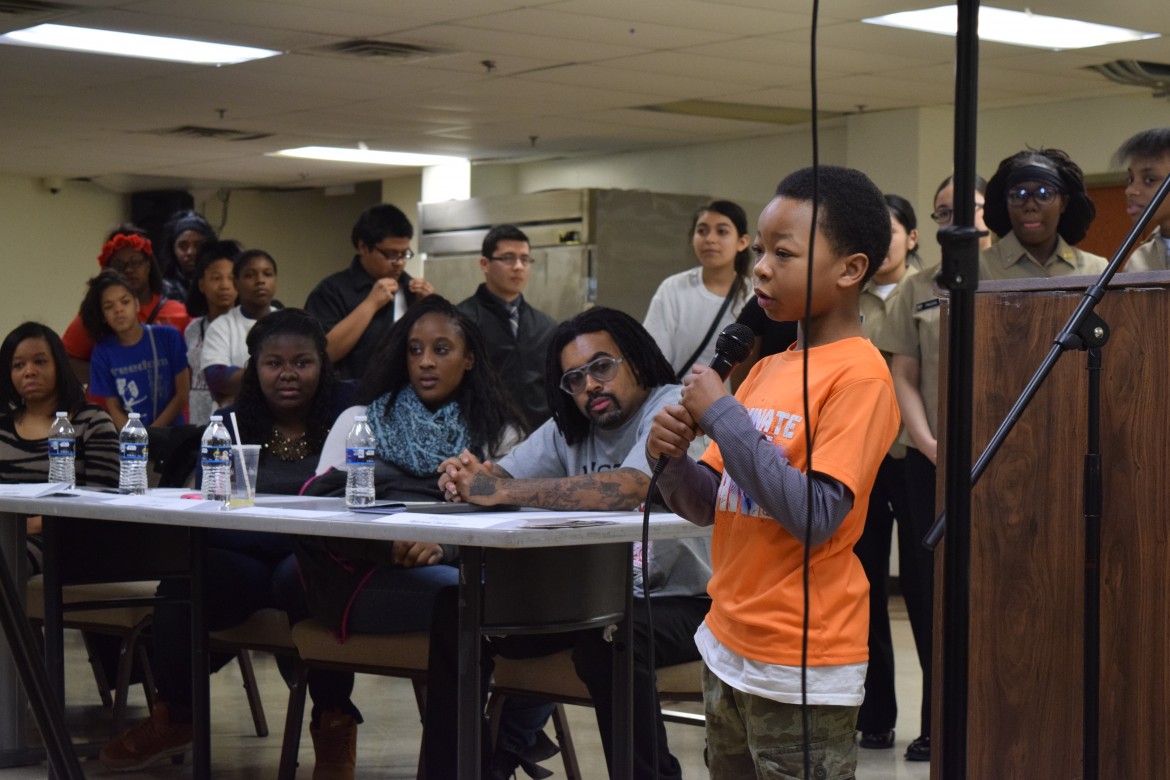 Youth, parents and teachers from neighborhoods across Chicago came together in Austin Saturday to discuss with elected officials how to prevent violence in their communities.

“We have not properly taught our black boys and girls how to peacefully deal with situations when someone bruises their ego,” Bickham said. “These are things that have to be taught at a young age.”

About 50 students from Chicago elementary and high schools attended the event. Many walked to the podium to share possible solutions.

“To prevent violence we have to start at home,” said one young girl.

“We need more role models to tell us what to do,” said another student.

“We need to encourage loving each other,” another young girl added.

As student after student came forward, a common theme became apparent: the solution many young people presented lies in giving kids more after-school activities, providing stronger discipline from adult role models, and learning to love and accept others without bias.

Marcel Jackson, a 27-year-old entrepreneur, consultant and community activist from the West Side, said young people also need to reevaluate their group of friends.

Oftentimes, violence starts for petty reasons, he said, and kids need to surround themselves with those who will build them up and make them better.

“Your network equals your net worth,” Jackson said. “If you the strongest link in your chain, you need a new chain.”

The violence plaguing Chicago streets has claimed the lives of many children and young adults over the past two years, from 9-year-old Tyshawn Lee to 17-year-old Brandon McKnight.

Judge Marianne Jackson expressed her disappointment in the lives lost, and she urged the group of young people in attendance to value their lives more than getting even with those who mistreat them.

“You are valuable,” she said. “There is only one of you. You are priceless. You cannot be replaced.”

Part of overcoming the violent in the streets is linked to mending relationships with police officers, said one audience member.

David Byrd, a captain with the Illinois State Police, said he was working on training his officers to be more tolerant and impartial when it comes to confronting people.

The police will continue to protect, he said, and learn to take people for face value rather than assuming the worst and acting aggressively.

A young Hispanic boy, dressed in an ROTC uniform, asked if the solutions presented at the meeting applied to just black people or to all ethnicities.

U.S. Rep. Danny Davis said many times poor problems are given the label of black problems, but the problems and the solutions are not limited to race.

But the history of slavery and racism in America, said Davis, has left black people at a greater disadvantage than any other group.

Many agreed the root of the violence issue is a lack of positive identity, and in order to correct it, the community must change the way it sees itself.

Davis said even thought the discussion was targeted toward the youth, adults are not exempt from the role they share in perpetuating violence and must help to end it.

“I think the solution to violence within our communities is breaking the generational curses within our kids and our families and our homes,” Woods said.

“[Show] them a different route to life than what we experienced as we were growing up as kids ourselves.”