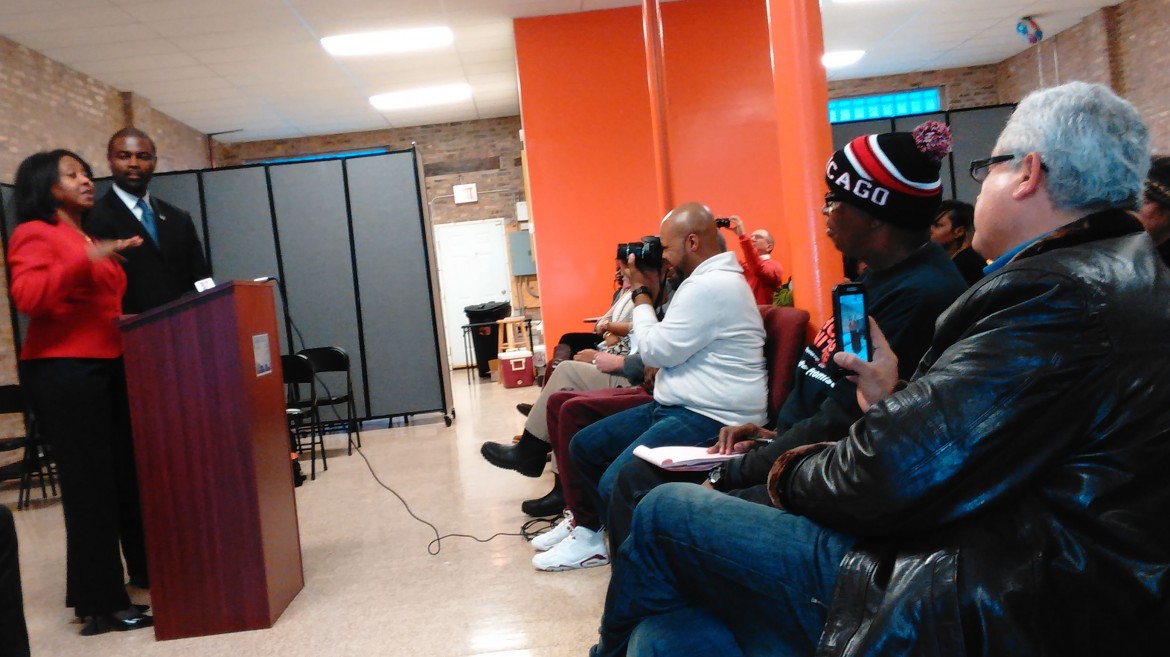 Residents and elected officials were fired up at last week’s community meeting about the proposed state bill to recall Mayor Rahm Emanuel.

But will that enthusiasm translate into a grassroots movement to get the bill passed? That’s the challenge attendees acknowledged during last weekend’s meeting at 4926 W. Chicago Ave.

“It’s going to be up to all of us to get this moving if we stay focused,” said state Rep. La Shawn Ford, the bill’s chief sponsor.

About a 100 people attended the Jan. 9th meeting, including residents from the South Side and co-sponsor Rep. Mary Flowers.

The bill, currently assigned to the Illinois General Assembly’s Rules Committee, would allow Chicago voters to oust the mayor of Chicago in a recall election through a voter petition.

But the recall bill has several hurdles to jump before becoming reality. Ford said Saturday’s meeting was the first step in developing a game plan to get the legislation passed.

State law covers recalling the governor but not the mayor. A few attendees Saturday said they also want Gov. Bruce Rauner, who was elected in November 2014, recalled.

But Ford said the focus of Saturday’s meeting and the effort moving forward is about Emanuel.

“This is a simple bill. It’s a distraction when people tell you, ‘Add this, add that,'” Ford said. “Every time you add something to a bill, you get another person saying ‘I don’t like that, so I’m not voting for it, ‘If you keep it simple stupid,’ you got it.”

Flowers said if the people want recall legislation for state lawmakers, the legislature will address that down the road, but the priority now is the mayor of Chicago.

“People want to confuse you and say, ‘Make sure that they are impeached as well.’ We don’t have any problem with that,” she said.

Another hurdle for the mayoral recall bill is addressing Chicago’s home-rule status, which gives the city control of its own government structure and polices. The state’s new constitution in 1970 gave municipalities with 25,000-plus residents automatic home-rule designation.

The recall bill, however, would not be undermined by the city’s home-rule status, said Phil Huckleberry, a member of Illinois’ Green Party.

The bill would give Chicagoans the power to recall an elected official, not dictate how the city governs itself, Huckleberry explained.

“Recall is a fundamental democratic right, and as soon as it’s the law of the state and the city, the people can execute that law,” he said.

Yet another hurdle is whether Emanuel could run during a special election to elect a new mayor even after losing in the recall.

Ford said that’s something the General Assembly would need to address, but attendees Saturday said the legislature should just add a no-run provision in the bill.

If approved by both the Illinois House and Senate and signed into law by the governor (who has said he would support such a proposal), the recall process would take effect immediately.

More than 88,000 signatures from registered Chicago voters would be needed for a recall election, which would then have to be authorized by the Chicago Board of Election Commissioners. Emanuel would have to get 50 percent or more votes to defeat the recall.

“If the mayor suppresses the vote – the way he suppressed the [McDonald] tape – to less than 50 percent, then he would probably be able to stay in office,” Ford said. “Hopefully, 50 percent-plus-one will come out and say we need to recall the mayor.”

The special election for a new mayor would need to be set by the local election board within 100 days after a recall vote.

“That’s the time,” Ford said, “when you can make your choice, when all of the people that believe they can run this city better than Rahm can step up and let you choose the best candidate.”

Ford said it’s not an easy process to get to a recall but a grassroots effort by the people will keep the momentum going.

Some attendees Saturday were optimistic the bill will become law.

“This is our fight,” said Jazette Moffett of the Ashburn community, who encouraged residents to seek out their state legislators face-to-face to get them behind the bill. “If people are not aware of why they should fight, they won’t fight.”

“People have to be stirred up to act. We are stirred up and fed up,” she said. “That is the momentum that is going to keep this going.