The Austin High School campus is poised to become one school again.

The Chicago Board of Education will vote Feb. 24 on a proposal to consolidate the campus from the three current schools into one.

Teachers and staff at the three schools – Austin Polytechnical Academy, Austin Business & Entreprenuership Academy and VOISE Academy– have known consolidation was possible as far back as late 2014.

If approved by the board, the single-school campus would open this coming fall 2016.

Austin High, 231 N. Pine, was among the schools closed in 2004 as part of the Renaissance 2010 plan to convert failing schools into small school campuses.
The Business Academy opened in 2006, followed by Polytech a year later and VOISE in 2008.

But enrollment at each school has dwindled since their openings, and some faculty have left for teaching jobs elsewhere. Returning the building to a single campus has been a goal of some in the community.

The consolidation effort was led by the Austin Community Action Council, a group that includes current and former Austin High parents and activists. The Austin CAC submitted its plan to CPS and the board in November.

The consolidation will phase out the Business Academy and Polytech but maintain their curricula around manufacturing and entrepreneurship.

Teachers and staff at those schools will receive Reduction In Force (RIF) notices, as required by law when layoffs occur, but those employees will be able to apply for jobs in the new school, according to Chicago Public Schools.

Staff who are expected to receive RIFs include clerks and counselors. The two principals will also be let go, with the building having just one top administrator.

The loss of staff and teachers, including those who’ve taught on campus before the 2004 closure, have many in the building worried, said Alyson Stout, a seven-year teacher at VOISE.

CPS alerted teachers and staff about the consolidation in a letter last month. Stout said the VOISE teachers feared they’d be losing their jobs.

But none of those teachers will, said Randel Josserand, CPS’s chief of schools for Network 3, which includes Austin.

Those receiving RIFs at the other schools, he added, will get a follow-up letter asking if they want to apply for jobs at the new school.

“We want to look at this as a consolidation, so the staff of those two schools would be incorporated into the one school that we will have,” Josserand said, speaking to staff and parents at a public meeting held earlier this month.

Austin CAC member Mildred Wiley said her group wasn’t looking for anyone to lose their jobs.

“It was always our intention to have a comprehensive, all-inclusive high school that will attract students back to this community. That was our underling goal, not to have anybody lose a job,” Wiley said.

Josserand said the new school would likely have a smaller workforce after the consolidation, with other multiple positions, like the principals and clerks, reduced to just one.

Josserand, however, stressed that the community will have a say in how the building is staffed.

While CPS is committed to having one principal and at least one clerk and one counselor on staff, the community might decide that more clerks and counselors are needed.

“We do have a commitment to put some additional resources here as we have in the last few years,” Josserand said.

Stout was pleased to hear about the VOISE staff but said teachers there are still concerned about losing co-workers at the other two schools.

“When you here anything about a school closing, it’s understandable that people are going to be concerned,” she said.

Staff at all three schools, Stout added, have other concerns, such as if students will have adequate academic and counseling support.

Josserand said the Chicago Board of Education wants to ensure those supports are in place in the new building.

Lucia Deleon-Scott, a parent coordinator and program assistant at Austin Polytech, said she doesn’t want to see teachers who’ve been at the school for years fired. She said the consolidation doesn’t worry her because the campus feels like one school already.

“It never made any sense to have three schools. My main concern are the teachers. They know these kids, and the kids know them. If we lose them, we’re going to lose the kids because they’re going to go someone else. It’s already happened,” said Deleon-Scott, who’s had three daughters graduate from the high school. 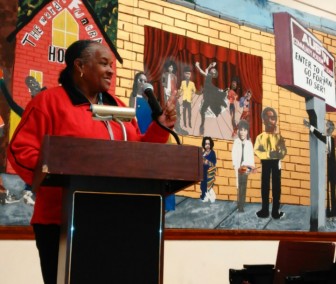 Catherine Jones, a member of the Austin Community Action Council, speaks about her group’s support of a plan to consolidate the three high schools on the Austin campus into a single school.

Austin CAC member Dwayne Truss said longtime, dedicated teachers should get first preference for jobs at the new school, an opinion shared by others at the meeting.

“The students do better in smaller classrooms, and the teachers do better. The kids learn more, and we’re able to meet their needs.”

Some things have already been consolidated over the last year, like staff transitioning under one payroll system, and some teachers, like Walker-Jones, having students from all three schools in their classrooms.

According to the most recent state school report cards, the campus has a combined enrollment of about 550 students.

The building’s capacity, however, can house upwards of 3,000 students, which is what enrollment was in the 1980s. At the time of its 2004 closing, enrollment was estimated at around 800 students.

The transition back to a single campus can be viewed as a victory for proponents, but Truss cautioned that much work still needs to be done before folk should start celebrating.

“We could be back in the same situation five, 10 years from now if no one takes ownership of this institution,” he said. “If you don’t take ownership, get involved and let things fester, then you’re back to this vicious cycle.”

A follow-up meeting about the consolidation is scheduled for 5:30 p.m. Tuesday Jan. 19 at the campus.