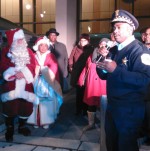 Kids performed music and poetry for the large crowd gathered under the unlit, two-story tree. Santa and Mrs. Claus – both with striking resemblances to two 15th District officers – were there again as well. And then the countdown to lighting of the tree to much applause.

But this year’s tree lighting held Dec. 2 was done in the midst of turmoil.

The evening’s festivities came two weeks to the day after the Laquan McDonald police shooting video was released to the public under court order. It came more than a year after the 17-year-old boy was shot 16 times by officer Jason Van Dyke. Cook County State’s Attorney Anita Alvarez charged the officer with first-degree murder a day before the video’s release.

Protests and outrage has engulfed the city, and Austin, in the last two weeks.

The controversy could not be overlooked even during the holiday festivities of lighting Austin’s Christmas tree. But many of those in attendance, including harsh critics of Alvarez and Mayor Rahm Emanuel, chose to focus on healing the community.

“There’s a lot of challenges we face, but there’s an understanding that we are all in this together,” said Amara Enyia, executive director of the Austin Chamber of Commerce, which has sponsored the annual tree lighting the last 11 years.

Enyia spoke from the podium inside the community room at 15th District Police headquarters, as the festivities moved inside following the tree lighting.

There was no anger, no tension that evening, much different from the heated community meetings, marches and protests happening in Chicago.

“This is a community that is very resilient and driven. We have so many resources and assets, so many good people that are really working hard to make this the best community in the city of Chicago,” Enyia said before acknowledging the 15th District police directly.

“I want to make sure I thank the 15th District, because in a time where it is very easy to be critical of our police force, we have to give credit to a district that has demonstrated what it means to engage with the community. When we talk about community policing, they have set the standard,” Enyia said to applause from the audience.

“We have to work together as a community, and these types of festivities and activities help us to do that,” said 28th Ward Ald. Jason Ervin. “We need opportunities to talk among each other and just share ideas, and that’s what these types of events do.”

Ervin and many others in attendance also gathered the night before (Dec. 1) at Austin’s Christ Tabernacle Church to discuss the McDonald shooting and the mayor firing Police Superintendent Garry McCarthy.

They’re demanding a federal probe of Emanuel, Alvarez and the Chicago police department, accusing all three of a cover-up to keep the video and its incriminating evidence from the public. The U.S. Department of Justice announced last week that it will conduct a civil right investigation.

The footage showed McDonald being shot as he walked away from officers. All 16 shots came from Van Dyke, who had just arrived on the scene. The police department said initially and in reports detailing the incident that McDonald lunged at the officer with a knife, forcing him to shoot.

The department has been strongly criticized for weeks now, both locally and nationally. But 15th District Commander Dwayne Betts said the morale among his officers remains high.

“If you look around here, people are clamoring around the officers. These officers are glad to be out here,” Betts said. “The morale here is outstanding. We know what we have here in our community, they know what they have in us, and that’s what we build upon.”

“We need the police, and we need a department that supports good policing,” Boykin said. “The death of Laquan McDonald represents one of the darkest chapters in the history of America, but it’s something we will heal from. But before there’s healing, there has to be accountability.”

Boykin and other community leaders led a march around City Hall the last two Fridays; dozens of people attended both times, circling the building 16 times. Boykin said holding everyone involved in the cover-up accountable will begin healing the city.

“There needs to be an investigation of all prior police shootings and the release of all dash-cam videos,” Boykin said. “You have to open things up in order to reestablish trust.”