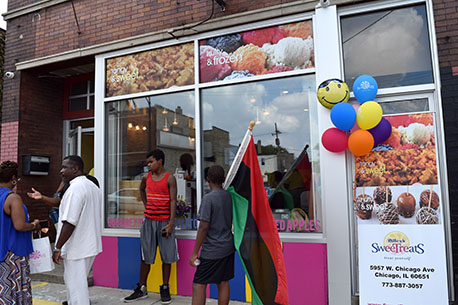 The push to come out Aug. 15 and support the new business was part of the Austin African American Business Networking Association’s Black Economic Empowerment Rally (BEER), which promotes black-owned businesses on the West Side.

“The whole objective is to see how much money we can do in two hours,” said Malcolm Crawford, executive director of AAABNA. “But then we look for the whole day to see what the numbers look like. Then, over the course of the month, we try to see how much they can add to the rest.”

Sweet Treats brought in over $2,000 for the day as a result of the BEER event, Crawford said.

The idea for Sweet Treats came from owner Layla Bitoy’s trip over to Italy, where she fell in love with the trendy gelato dessert, she said.

“At the heart, or center, of who I am, I’ve always loved sweets,” Bitoy said.

“So, the combination of me loving sweets with being introduced to authentic gelato in Italy, coupled with Chicago Avenue as a cornerstone for where my family actually got started, it really made sense to bring my unique flavors, my love of sweets and flavor and frozen desserts to a community here where my family has deep roots,” she said.

Gelato is viewed as a healthier option than traditional ice cream because gelato is made with 25 to 30 percent less sugar, she added.

Pastor Rickey Sanders of Living Faith Outreach Worship Center, 5820 W. Chicago Ave., said he hopes the BEER events will help attract new businesses to the neighborhood by showing people will come out to support them because “people want nice things.”

“Don’t be afraid, invest good money in the place, don’t make it look raggedy,” said Sanders, whose favorite sample of the day was the salt- and vinegar-flavored popcorn.

Sanders’ wife Helen — her favorite treat was the cheese-flavored popcorn — agreed it was encouraging to see new businesses being supported in the community.

“It’s very exciting and fulfilling to see the West Side — Austin — is coming up, and we have things we can go to without going Downtown to get our needs met,” she said.

The grand opening for Sweet Treats is scheduled for sometime in September, Bitoy said. And people can expect a few new items on the menu — including sweet potato pie and peach cobbler flavors of gelato — as well as some other surprises, she said.