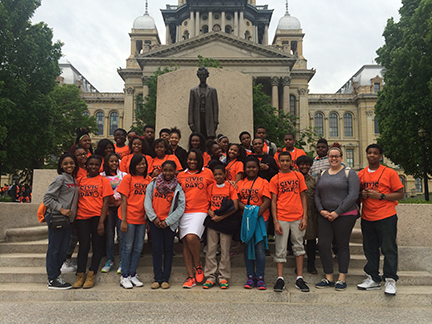 Over 600 8th graders from 18 schools across Illinois – including students from two Austin schools – gathered at the state capital a few weeks ago to meet with lawmakers and discuss issues important to them and their communities.

“It’s important that we bring them here so that they can see democracy in action,” Lightford said.

In the weeks leading up to the trip, students developed civic topics that were discussed in an open forum in Springfield.

School funding, food deserts, economic development, police brutality, proper funding for parks and voter turn out in the black community were just some of the issues students presented to their peers, as well as legislators at the capital.

Discussing these issues gets the ball rolling in an effort to address them, Lightford said. And hearing from elected officials helps students learn more about how laws that affect their lives get passed, she said.

House Speaker Michael Madigan and Gov. Bruce Rauner stopped by the event to address the group of eighth graders.

Shawn Sanders, 14, a student at Brunson, focused on bullying.

“It’s happening a lot nowadays, and we need people to stand up to it,” Shawn said.

Discussing topics like bullying lets other schools in different communities know that there are common problems each community shares, said Deborah Hervia, who teaches 7th and 8th grade science at Brunson.

“I thinks it’s a really good process for the kids to come and see and actually meet people and know where change can happen,” Hervia said.

Hervia said her school’s 8th graders decided to focus on a lack of nutrition in their community, leading them to make plans to start a garden at the school to grow fresh fruits and vegetables.

Students from Catalyst Circle Rock Charter School decided to discuss the lack of educational funding for their civic topic.

“The main purpose was to express education and why it’s important,” said Walter William, 13, president of the Catalyst Rock Student Council.

Walter hopes to take what he learned in Springfield and apply it to school’s student government. He plans to make sure all students are given an opportunity to voice their concern about issues.

Keosha Miller, 14, the student council’s vice resident, said going to Springfield helped her get a bigger picture of what’s going on in other communities outside of her own.

“It’s important that at an early age, we’ll know what’s going on in the world,” she said.

Emily Wilkie, who teaches 7th and 8th grade English at Catalyst Circle, said it’s important to expose young people to discussions about how their opinion matters, even at a young age.

“They need to be able to understand the issues that are happening in their community and the communities around them,” Wilkie said.

And understanding how government and legislation work will affect how involved these students are when they become young adults and are able to vote, she said.

“(They’ll) understand that their voting directly affects who’s in office and then how those people make decisions will then affect their community,” Wilkie said.