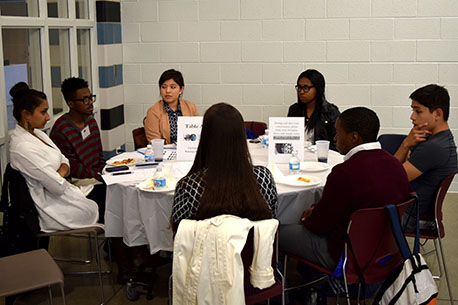 When you bring together people from different backgrounds but with the same common goal of helping each other and their communities through philanthropy, a lot of good can happen.

The Chicago Community Trust celebrated 100 years of doing exactly that, including in Austin at Christ the King Jesuit College Preparatory School.

All day Tuesday, May 12, On the Table events were held throughout Chicago to bring people together to share their stories with each other and others looking to make a positive change in their communities.

About 25,000 people participated in the events, up from last year’s inaugural year that had approximately 11,000, said Daniel Ash, chief marketing officer for The Chicago Community Trust.

The trust uses these events to collect information about programs that are improving neighborhoods and peoples’ lives, then makes that information available to donors or anyone else interested in helping fund them, or create new programs where there is a need, Ash said.

Some of the issues students discussed included drug use, family stability, neighborhood cleanliness and a general sense of apathy felt by many in the most downtrodden areas of Chicago and the suburbs. 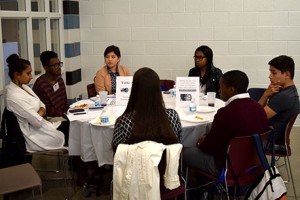 “The kids came from very different communities, but as they were talking about the issues that impacted their personal lives, they actually found a lot of similarities in their experiences,” said Sowmya Sastri, one of the facilitators and corporate work-study coordinator at Christ the King.

Those conversations were important for the students to have – but equally important is that community and political leaders listen and respond to them, Sastri said.

“I think these kind of conversations can’t happen just once a year; it needs to be an ongoing thing, an ongoing event, and maybe we need to have more politicians here, more decision makers, to listen to their ideas,” Sastri said.

One politicians who was there was Chicago Treasurer Kurt Summers.

Summers said information gathered from conversations like this allow him to go to city leaders and prioritize neighborhoods’ greatest needs.

Austin resident and Christ the King senior Mitchell Dilworth said he enjoyed the conversations and felt his voice was definitely heard.

“At my table, we all gave good points,” Dilworth said. “They talked about things they thought about their community that could be improved on. Everyone’s voice was heard, even mine.”

Those points included thinking about where other peoples’ perspectives come from, Dilworth added.

“One of the facilitators told us to always imagine yourself in someone else’s shoes,” Dilworth said. “You don’t know their situation, you don’t know what they go through every day, who they have to deal with and what they go home with. So, that’s what I took away from today.”

At least one student was cautiously optimistic about the long-term effect of Tuesday night’s conversations.

Dudley said he’s concerned that some might use the events as publicity for their own gain, rather than for the benefit of the community. He said his skepticism was based on other groups coming into the community and asking for advice on what improvements to make, but then seeing little, if any, results.

But as long as people ask for his advice, he will remain willing to give it, he said.

“There’s always a chance and a possibility of, you know, somebody really caring about you enough to at least try and better your community and your ideas.”

The talks at Christ the King were facilitated by representatives from law firm DLA Piper LLP, asset management company Northern Trust and Christ the King.

View all On The Table Posts →