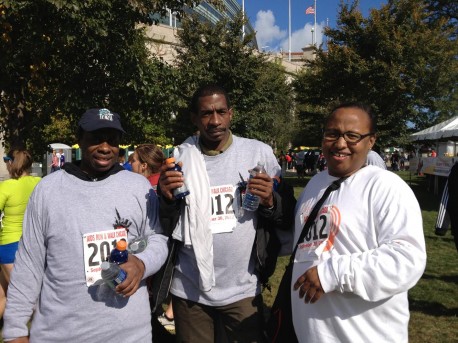 Hugh Cole has grown passionate about raising awareness for HIV ever since he lost his partner Michael to the disease.

Cole, a certified alcohol and drug counselor for the Howard Brown Health Center, said there’s now better medications that are more accessible to those who are HIV positive.

“When we talk about availability, we want to talk about the awareness that’s brought out by events such as the AIDS Run & Walk,” he said.

This weekend, the AIDS Run & Walk Chicago marks its 13th year of raising awareness and funds for HIV and AIDS programs. The event will be held Sunday at Arvey Field in Grant Park; on-site registration ($50) and packet pick-up begins at 8 a.m.

Cole said the event increases people’s awareness and counters a lot of the stigma and judgment that remains about HIV and AIDS.

“To me, one of the most important things about this event is for the families of people who have been impacted and those of us who work with these communities to say, ‘We stand with these people and say this is not their fault,’” Cole said. “It’s a disease, like cancer; we don’t blame someone who gets cancer.”

Cole said the populations most affected by HIV include African Americans, including black men. He said though outreach has improved, there’s still a long way to go, especially in African-American communities.

As a gay, African-American man who’s been diagnosed with AIDS, Derrick Burris knows all too well how the disease affects the black community. The condition is something many don’t want to discuss.

Burris, 41, first learned he was HIV-positive in 1995. At the time, he was addicted to drugs and prostituting himself to support his addiction. After going to jail a few times, Burris got his life turned around in 2007. He’s been clean for the last seven years – and an advocate for the cause ever since.

“From the moment I was diagnosed, I’ve had nothing but positive support,” he said. “I didn’t have the like ‘throw cups away, we can’t drink after you,’ none of that occurred.”

Burris works as a health care educator for Austin CBC, a non-profit that serves the needs of Chicagoans living with HIV or AIDS. The organization holds events for people to get tested and learn more about the disease.

“I’m more involved now because I walk, and then I also just want to be a voice for those who are still in denial of having the virus or don’t have the love and support of family and friends that I received,” he said. “Because it’s not a good experience for everyone.”

Rhett Lindsay, director of fundraising events for AIDS Foundation of Chicago, said about 3,500 people participated last year, and they’re on track to hit that number again this weekend.

The event is an opportunity to raise awareness about the cause and educate people about new medications, as well as try to erase the stigma about the disease, Lindsay said.

“I think this is sort of the one day in Chicago where anybody whose life has been impacted by the epidemic can celebrate life and share their story with others – and reflect on how far we’ve come with the epidemic and the progresses we’ve made.

“But yet how far we need to go in terms of advocacy and really bringing awareness.”