Speaker after speaker took to the podium, and the message to CPS officials was clear—leave the West Side schools alone.

About a half hour into the meeting, the spirited crowd toting “Save Our School!” signs and wearing school-pride T-shirts grew so large that the church’s pastor, the Rev. Reginald Bachus, asked people to go to the overflow room in the basement. And guards had to lock the church front doors to keep any more people from entering. Breakout sessions after public comment were also cancelled due to the long speaking line, according to CPS.

Nicole Shere, a teacher at Louis Armstrong Math and Science Elementary School, said Armstrong is a small school but that allows teachers to build stronger relationships with their students.

But Shere said Armstrong, which is a Level 2 school on academic probation, should not close because of its low enrollment.

The district says it has too many empty seats and could shut down some underutilized neighborhood schools to close its looming $1 billion deficit. CPS chief Barbara Byrd-Bennett recently said high schools and high-performing schools are off the table.

But that still leaves more than a dozen Austin schools underutilized that could possibly be on the closure list, CPS data show.

Only three Austin schools — Howe, Leland and Hay — and Galewood’s Sayre Language Academy are effectively utilized, according to CPS.

Asif Wilson, a science teacher at 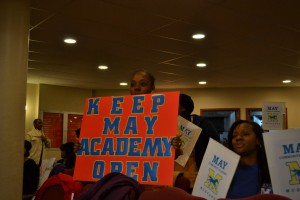 Wilson said CPS says it lost more than 140,000 students during the last decade, which is about an 18 percent decrease in enrollment.

“This is not the case,” Wilson told the crowd. “Overall enrollment at CPS schools has only declined by 6 percent in the last 14 years—the loss of only 28,289 students.”

And during those years, Wilson said, CPS opened more than 120 schools, most of them charters.

“So what are we saying about public schools in this city?” Wilson said. “What sort of facts are we presenting to the public, and what’s the true rhetoric?”

May is a Level 3 school, the lowest academic performance rating, and underutilized, according to CPS.

The purpose of the citywide community meetings, according to CPS, is to hear community members concerns and to gain “more granular information about their individual schools that our own data may not have captured,” AustinTalks reported in January.

All public comments were recorded and will be complied in a report for Byrd-Bennett, according to CPS.

The district is expected to make final school closing recommendations no later than March 31. 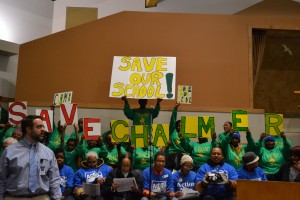 A narrower list of what schools could face the chopping block could be released at the Austin-North Lawndale Network’s next meeting Feb. 13 at Greater Galilee Baptist Church, 1308 S. Independence Blvd.

Attendees, who braved bitter cold Thursday night, were passionate about saving their schools, but, for the most part, were respectful of CPS officials, including Chief of Teaching and Learning Annette Gurley and Chandra James, chief of elementary schools in the network, among others.

“We want our kids educated,” said State Rep. La Shawn K. Ford (8th). “It’s about giving us what’s right…all it takes is the political will to do what’s right”

And Ald. Deborah Graham (29th) said she’s “extremely concerned” about school closings in Austin, because “a lot of our schools have made a lot of progress.”

For example, since 2010, Armstrong’s Shere said her school has experienced an 18.1 percent increase in its overall composite score, and more than 60 percent of students are meeting or exceeding standards on the Illinois Standard Achievement Test (ISAT).

Ald. Michael Chandler (24th) demanded that the Chicago Board of Education not close any schools in Lawndale and said computer and science labs and libraries, among others resources, be brought to every school in the area.

The alderman said West Siders aren’t only demanding that their schools not be closed; they want the resources they say are found at other schools, like on the North Side and in other communities.

“We want the same thing,” Ervin said, which riled up the crowd. “When I go to Payton, I want to see that over at Marshall.”