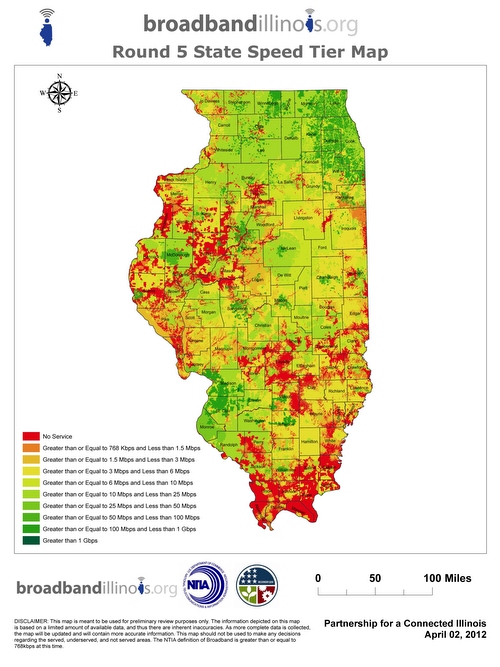 On a Friday morning at the North Austin Public Library, Miranda Stidhum, 40, logged on to one of five public-use computers to check her email.

She came to the library, located at 5724 W. North Ave., to participate in the free “You’ve Got Email” class.

Although she created a Yahoo! account in 2003, she said she’s still mastering the art of email and learning how to best use the Internet.

The Austin resident is one of many Chicagoans who visit the city’s libraries regularly because she cannot afford her own computer and Internet service.

Some people in the state may take for granted their ability to pay for and easily connect to the Internet using smart phones, laptops and other electronic devices at home, but that’s not the case for Stidhum and many others who live on the West Side of Chicago, along with other parts of Illinois.

Stidhum said the library is the main place in her community where she goes to get connected, but she also visits the Oak Park library, just beyond the city limits, to subscribe to local elected officials’ newsletters and to learn about job opportunities in the area.

But ever since the Chicago City Council voted in November to cut library hours and staff as part of Mayor Rahm Emanuel’s 2012 budget, Stidhum has fewer opportunities to get online, she said.

“The hours before were better for me.”

Like others in the community, Stidhum said she wishes there were more places in Austin to use a computer and the Internet for free.

That could change if current organizations that offer technology training and access in Austin work together to develop a broader digital plan for the community, said Amara Eniya, executive director of the community coalition Austin Coming Together.

Gaining basic access to high-speed Internet is still an issue for many parts of Illinois, but some telecommunication experts say in Austin it’s more about the cost of the service and the public’s lack of computer and Internet knowledge that contributes to the digital divide on the West Side.

“In a lot of areas, like Chicago, the access is not a problem,” said Drew Clark, executive director of Partnership for a Connected Illinois, or Broadband Illinois, a Springfield-based non-profit that collects and publishes broadband data and works to ensure broadband access throughout the state. The accompanying map shows what areas in Illinois are connected and the speed of Internet access. The portions in red are where there is no Internet service, yellow is average service and green areas have the fastest connections.

Chicago is layered in green on the map, but some southern areas in the state and Clark County in south-eastern Illinois, for example, are mostly in the red.

Despite advances in technology, Clark said not everyone can afford the price of Internet, and seniors, people with disabilities and low-income individuals sometimes don’t know how to use the technology or why it’s beneficial to be online.

The economically struggling Austin community on Chicago’s far West Side – the largest community area in the city with about 100,000 residents – is one example of a digitally divided neighborhood.

The median income in Austin is about $30,000, and the community is almost 90 percent African-American, according to U.S. Census data analyzed by the Great Cities Institute at the University of Illinois at Chicago.

There’s Internet coverage in the area, but the challenge is providing ways for the community to tap it, said Austin Coming Together’s Eniya.

She said affordability of service and equipment, such as a desktop computer, tablet or smart phone, is an issue for the community.

“Technology is seen as an add-on, as a luxury,” she said. “It shouldn’t be. It’s a necessity.”

There are several organizations working on a number of initiatives related to the digital divide in Austin. For example, Spencer Elementary Technology Academy, located at 214 N. Lavergne Ave., has a parent resource room with classes that help residents become more computer literate.

The other technology hub in Austin is the Peace Corner Youth Center, located at 5022 W. Madison St., where residents can be trained to use Microsoft software such as Word and Excel, among other programs.

But the neighborhood coalition Austin Coming Together has a broader plan to connect the community, although Eniya said it’s not making all the details public until next month.

Austin Coming Together is one of many organizations across the state that applied for an Eliminate the Digital Divide grant from the Illinois Department of Commerce and Economic Opportunity in March.

The state-run program is aimed at low-income areas of Illinois, and the funds – up to $75,000 – may be used to provide training services and activities that use technology to improve academic achievement, career development and adult education, along with equipment and software costs.

The grant program, which will announce winners in June, is one example of the state’s education effort “to make sure people have skills and appreciate the benefits they get from being online,” Broadband Illinois’ Clark said.

Applying for the digital divide grant is only the beginning of Austin Coming Together’s technology plan for the West Side.

“We are hoping that the digital divide grant will allow us to pilot a program that we will eventually scale up,” Enyia said.

“We have a huge amount of interest from our member organizations, so we are working on getting a group together to flesh out our larger digital divide plan.”

Various partners in Austin are working to understand what technology education is already taking place in the community and “make it much more cohesive, so that the impact is much broader,” Eniya said.

The plan, once completed, will touch every part of the community – highlighting adult literacy, student access to technology, and better facilities, services and resources for residents.

“That’s our vision,” she said.

“The digital divide grant is a great way to get the conversation going.”

But the group isn’t calling for more technology for the sake of technology.

“This is a tool that can enhance the quality of life as an individual and as an Austin resident,” she said.

“Once we demo the usefulness of that tool … they will see the advantages.”

Austin isn’t the only community that’s applied for the state’s technology grant.

This year, the state received more than 320 applications – nearly double the number of applications submitted in 2011, said Kelly Jakubek, communications manager for the Illinois Department of Commerce and Economic Opportunity.

“A large portion (of applications) are from Cook and the collar counties, but we also received several from central and southern Illinois,” she said.

The need for a more advanced technology infrastructure is “high across the board,” she said.

In the 1990s, Illinois saw a spike in the use of the Internet and computer technology. With that spike, there was a strengthened connection between digital literacy and economic development, she said.

“While those technological and digital advances brought great prosperity to many, communities that lacked regular access to these technologies found themselves at a competitive disadvantage in the workforce,” Jakubek said. “This is what we refer to as the ‘digital divide.’”

As a result of the state’s competitive disadvantages, the Illinois General Assembly passed the Eliminate the Digital Divide law.

The 2000 law authorizes the Illinois Department of Commerce and Economic Opportunity to make grants to plan, establish and administer community technology centers that will provide training and access to computers for disadvantaged communities, Jakubek said.

Community technology centers are the places in a community, such as Peace Corner Youth Center in Austin, where residents go use a computer lab and get their education, Eniya said.

Eniya said the funds can be used to support already existing programs taking place in an established community technology center.

It’s important to keep the few programs that do exist in the community going, as people who know technology well have a higher standard of life and better job opportunities, according to the Illinois digital divide law.

“By creating a pipeline for these communities to access the technologies and training necessary to become digitally literate, they become empowered and more competitive in the workforce,” Jakubek said.