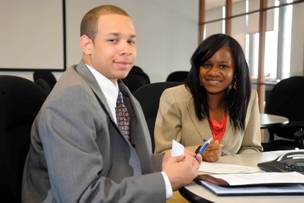 The internships are part of the Exelon, ComEd and United Way’s Stay in School Initiative, which provides a holistic suite of after-school programs for grammar and high school students. Participating students, who come from the Austin, Bronzeville/Grand Boulevard and Humboldt Park/West Town neighborhoods, attend monthly mentoring workshops led by Exelon and ComEd volunteers throughout the school year.

“We are working one-on-one with these students to give them real-world experience to effectively present themselves and compete for jobs,” project sponsor Fidel Marquez, ComEd senior vice president for governmental and external affairs, said in a press release.

“It’s very gratifying to see their confidence develop alongside their understanding of the importance of academic achievement.”

At the April 19 event, 20 students participated in panel interview sessions with a dozen Exelon and ComEd volunteers serving as interviewers and facilitators.  The internship spots are distributed among Exelon, ComEd, United Way and three Stay in School community partners – BUILD, Centers for New Horizons and Youth Guidance.  The students who earned the internship positions will be announced at May’s mentoring workshop.

The event is one of more than 100 community service projects Exelon employee volunteers organized for National Volunteer Week. More than 1,500 Exelon employees, family members and friends are expected to provide approximately 5,000 hours of volunteer service for the projects, which take place in Exelon’s service territories of central Maryland, northern Illinois, southeastern Pennsylvania and Texas.

“Their commitment to volunteerism and to improving the environment and quality of life in the communities we serve is a source of pride for us all.”

National Volunteer Week, which took place April 15-21 this year, is an annual, nationwide observance of individuals’ and organizations’ contributions to their communities.

In 2011, more than 2,400 Exelon employee volunteers gave nearly 62,000 hours of their time to community nonprofit organizations. This is equivalent to 1,550 work weeks or nearly 30 years of full-time service.