In honor of Domestic Violence Awareness month, Austin residents, activists, and domestic and sexual violence service providers took to the streets Thursday, demanding an end to a crime that affects so many.

The sun shone brightly as more than 75 people marched from the 25th District Police Station at 5555 W. Grand St. west to Central Avenue, north to Fullerton Avenue and down North Laramie Avenue back to the station for a rally. “Everyone has a role in stopping domestic violence,” said Mike Feinerman, co-executive director of Center for Advancing Domestic Peace, an agency that focuses on community outreach and offers partner abuse intervention services in English and Spanish.

Various area agencies, including Healthcare Alternative Systems (HAS) and Metropolitan Family Services, showed their support. Marchers carried signs with names of victims who were killed by a partner.

“Every day is a day we should come out and make people aware about domestic violence. It just doesn’t happen on this day or this month, but everyday some is in horror or terror going through it,” said Abram Hackman, a community activist who lead the group in calling for an end to the violence.

The unity of their neighborhood sends a power message, Hackman said. “Some people are so trapped and enslaved by their own fears, which in my opinion is the hardest thing to break through, but in numbers there is courage,” Hackman said. “That’s why it’s so important that the community and groups along with 25th Police District come out and galvanize people.”

From July 1, 2010, through June 30, 2011, the Illinois Domestic Violence Help Line received 29,468 recorded calls from people across the state seeking help, referrals and information about domestic violence.

There has been much positive change over the past decade, said Sgt. Tim Weigland, including the passage of the Cindy Bischof Law, which allows courts to order GPS monitoring devices for offenders who violate orders of protection.

But there is more that can be done, Weigland said.

“We need to spread the word that domestic violence will not be tolerated,” Weigland said. “And early intervention is the key.”

While domestic violence has many casualties, Colleen Sutkus, associate program director of Sarah’s Inn, said she hasn’t giving up her mission. Sarah’s Inn provides free counseling and advocacy services to the Austin community and partner abuse intervention services at a nominal fee.

“Seeing this many people coming out to walk in the neighborhood tells me there’s hope for a future without domestic violence,” Sutkus said. “We don’t want to throw away people just because they behave violently. We believe domestic violence is a choice, and they can learn how to choose different behavior.”

“Child abuse is a form of domestic violence, the way perpetrators can manipulate and control,” Dumont said. “It’s a huge problem, and it’s important to educate and provide resources for the community to keep children safe.” 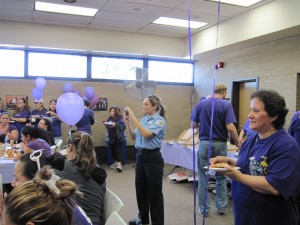 Those who commit domestic violence are four to six times more likely to sexually abuse their children. About half of incest perpetrators also abuse the child’s mother.

Thursday’s rally put a spotlight on domestic violence and made the community take notice, Hackman said.

“We saw people looking out their windows, and they were watching people wearing purple T-shirts ‘Domestic Violence is a Crime,’” Hackman said. “They are like walking billboards letting people know this is the number you can call when enough is enough, and that enough can be any day.”