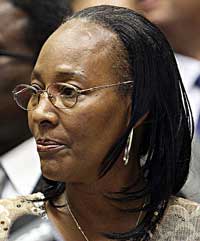 Her newly remodeled basement flooded during the record July 23 storm that dumped nearly seven inches of rain on Chicago.

“I felt the pain the last time,” she said, referring to last year’s rainstorm that fell almost to the day in 2010. “I know what we went through.”

To address a flood of complaints, Mitts assembled several Metropolitan Water Reclamation District of Greater Chicago commissioners and representatives from the city’s water department on July 28 to address residents’ concerns.

Nearly 200 residents packed a meeting room in the Coca-Cola Bottling plant, 1401 N. Cicero Ave., to learn why their basements keep flooding. Mitts called the meeting to inform residents on what the city is doing to help residents clean up.

“No one is saying anything,” said Mitts, who took it upon herself to collect service request forms to tally ward residents with flooded basements. “If some type of resources comes in, we have a way of knowing who got flooded and who we need to help.”

As of July 25, her office had collected 375 forms. Residents, though, had few options.

Last month’s storm was not declared a natural disaster by the federal government. Such a declaration would allow residents to receive financial assistance from the Federal Emergency Management Agency.

To read the rest of the Austin Weekly News story – including how some officials responded – click here.