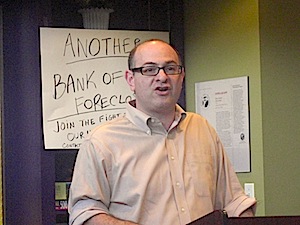 Dorothy Daniel, 78, never asked the government for a bailout like Bank of America did. But after making payments on time every month for her home of 40 years, she asked for help before she needed it, and now, Daniels, an amputee, is not only fighting for her life but to save her home from foreclosure.

Daniel is just one of thousands of West Side residents fighting for their homes or businesses. This time, the fight is with Bank of America, which has the greatest number of foreclosures in the country, in Chicago and in Austin, according to a new report released Wednesday by National People’s Action.

Richard Simon, a spokesman for Bank of America, said the company’s policy is to exhaust all options before taking action to remove residents from their homes.

“When we have exhausted viable home ownership retention solutions, Bank of America is increasing efforts to provide customers with dignified and less stressful alternatives to foreclosure, with streamlined programs for shorts sales and deeds in lieu,” Simon said.

Gordon Mayer of National People's Action says banks should be doing much more to keep people in their homes. (Photo/Barb Duckett)

National People’s Action, which originally started in Austin, joined forces with the South Austin Coalition to release the report “Bank of America Forecloses on Chicago.” After announcing the major findings Wednesday, organizers led residents on a walking tour to hang signs and point out the number of Bank of America foreclosures on two streets.

Gordon Mayer of National People’s Action said within a 1-mile radius of the Austin Senior Satellite Center at 5701 W. Congress Parkway, there are more than 50 foreclosed homes.

“Bank of America is creating eyesores throughout Chicago,” he said. “And right here in the community of Austin the problem is bad – and only getting worse. They have a responsibility to help these home owners and work with this community to keep the people in these homes and keep the streets safe.”

The report shows that in Chicago, there have been more than 8,000 foreclosure filings since 2008, and Bank of America is on track to file 3,000 foreclosures before the end of this year. 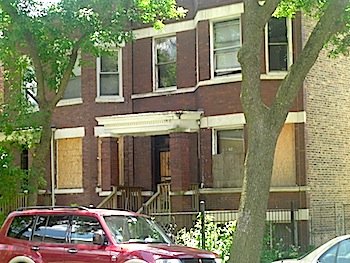 Signs of foreclosure, like these two boarded-up houses, are found throughout Austin. (Photo/Barb Duckett)

In Austin alone, there were 151 Bank of America foreclosure filings in 2009, and since January 2009, there have been 50 completed residential foreclosure auctions by the bank.

Simon said his company has employed several special, even unique, initiatives in Chicago to address home ownership preservation and community issues arising from the foreclosure crisis.

“Bank of America is committed to helping mortgage customers remain in their homes through the federal government’s Home Affordable Modification Program, various proprietary programs and individualized solutions,” Simon said. “As the largest mortgage servicer in the country, we recognize and have taken our position as an industry leader in home ownership retention and foreclosure prevention solutions.”

That’s not what the advocacy groups concluded in their report.

Simon disagreed with the report. He said since January 2008, Bank of America has completed 630,000 modifications through all available programs. 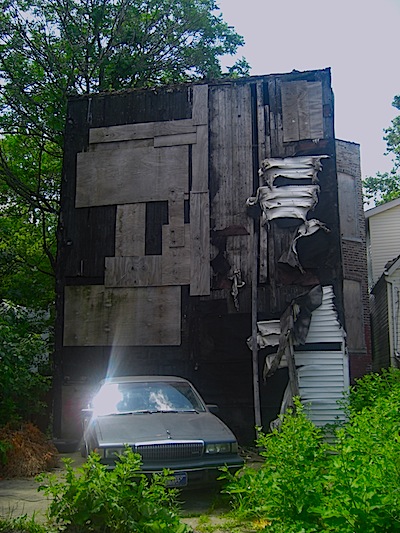 Just one of many boarded-up buildings in Austin. (Photo/Barb Duckett)

Rev. Sirchester Jackson of Mandel United Methodist Church said the foreclosure crisis is hitting lower-income communities the hardest, and in Austin, there is rarely a block that doesn’t have a vacant or boarded-up home.

“Over a year ago, the people and the government bailed out the banks, but today it seems like the banks have bailed on the people,” he said. “They took all this money from the government, from our pockets to cover themselves, and they can’t find a way to cover the people in these communities who need them. That’s not right.”

Daniel is one of those people. She was diagnosed with diabetes two years ago, and anticipating tough times, she made her first attempt to modify her loan through Bank of America. Daniel’s illness, which took one of her legs, forced her to quit her job, and after filing at least seven applications for loan modification – each one denied – she finds herself close to foreclosure. 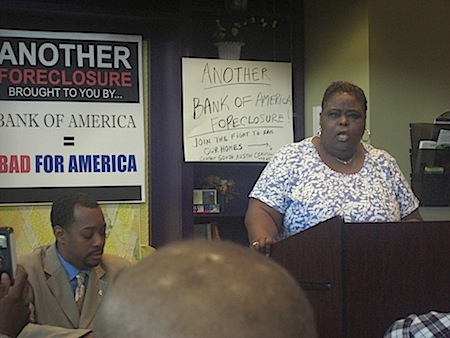 Theresa Welch-Davis of the South Austin Coalition has worked with many Austin residents fighting to save their homes from foreclosure. (Photo/Barb Duckett)

Theresa Welch-Davis, housing coordinator for the South Austin Coalition, helped Daniel file nearly all of her applications, noting that Daniel asked for help before times got bad. But Bank of America workers either said they didn’t have enough information or they didn’t have the right information, Welch-Davis said.

“They had the information; they just didn’t want to help,” she said. “These banks, all of them, they aren’t playing around with foreclosure, they are playing with people’s lives and destroying this community. What they are doing isn’t right, and we won’t let them get away with it.”

Raymond Guy, a spokesman for U.S. Rep. Danny Davis (D-Ill.), said the congressman’s staff stands ready to help fight the banks. Welch-Davis and Juanita Rutues, vice president of South Austin Coalition, pushed Guy to appeal to everyone at the city and state level. He responded: We will appeal to the entire Illinois congressional delegation.

The purpose of Wednesday’s walking tour was to hang signs on Bank of America-owned homes. Signs reading “Another Foreclosure Brought to You by Bank of America” were hung on several properties. Each sign nailed to a board or taped to a door drew neighborhood crowds and more outrage about foreclosures. 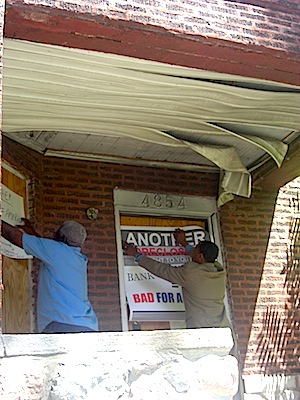 Phillip Barnes, 44, who lives near a foreclosed property at 4854 W. Gladys Ave., said the home has been vacant for 10 years. The back of the house, weed covered and burnt with black soot from a recent fire, was littered with trash and contained an abandoned vehicle.

“It’s been a real eyesore on this block for years,” Barnes said. “It wasn’t until recently that they put the boards up, but people still breaking in and causing problems. I mow the front yard and keep the sidewalk clear as much as I can, but somebody needs to do something.”

Between 4800 and 4900 West Gladys, there are 14 foreclosed homes, some boarded, most just vacant with letters taped on the doors and personal belongings still inside.

“Unfortunately, what is happening is the equity in the community is being drained completely, and this is a major social catastrophe,” he said. “People are getting poorer, and our banks are getting richer. Our society has become the tale of two cities.” 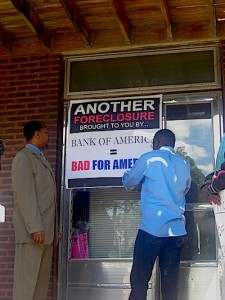 Noting that Bank of America is the largest mortgage servicer in the country, Simon said the company is working hard to address the housing crisis at all of its branches.

“Foreclosure is a sad and damaging result for the homeowners; a very costly result for the servicer and mortgage investor; and a detriment to the surrounding community,” he said. “While we cannot avoid foreclosure in some cases, particularly in today’s economy, Bank of America considers foreclosure only as a last resort.”

Rev. Jackson said foreclosure nationwide is a crisis – an epidemic, really – and it’s time the banks come to the table and work with communities to put people back in their homes and prevent others from being thrown out.

“These vacant homes bring in crime, criminals and violence to the neighborhood. They drive property value down, and they take away from this beautiful community we live in. Somewhere along the line the banks have dropped the ball, and it is our obligation to hold their feet to the fire.”