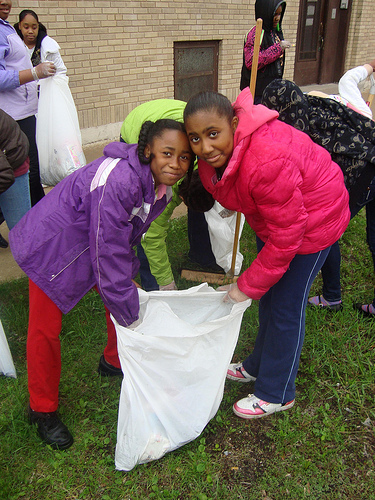 Twelve-year-old Simone Scott, a sixth grader at the Gary Comer Campus of the San Miguel Schools in Austin, is learning a lesson at school that can’t be taught in any book or classroom: How to give back.

On May 7, Scott and the rest of the students at the private Catholic school, located on 819 N. Leamington Ave., will spend half of a day working with the elderly and day care kids, as well as cleaning up their community and planting bright and cheery flowers, during the annual Comer Day of Service.

“I’m doing something good for our community and the ozone layer and we won’t have pollution and it will keep our neighborhood clean,” said Scott, who also participated in the school’s service day last year, picking up trash. “It makes me feel good.” 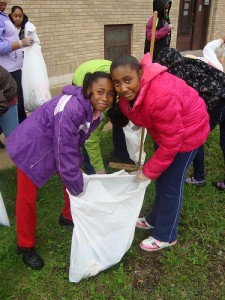 Alexus Williams (left) and Simone Scott (right) picked up trash in Austin last year as part of a day of service at the Gary Comer Campus of the San Miguel Schools.

Before the school opened its doors in 2002, the 800 block of North Leamington Avenue was plagued with drug dealers and shuttered buildings. Today, the block in the heart of Austin is quiet and cared for, and the folks at the Comer Campus like to help keep it that way.

But that’s not the only reason the students will be lending a hand to their neighbors this week.

“We’ve been the beneficiary of so much generosity that it’s important the kids are givers as well as receivers.” said Kathy Donohue, the school’s assistant principal. “They’re from a wonderful community, and they’re contributing to it being a great place.”

The late Gary Comer, the Land’s End founder who donated $1.2 million to establish the West Side school, died in 2006, and the first clean-up event was held that year in his honor. The Comer Campus brought the San Miguel model, already in place in the South Side’s Back of the Yards neighborhood, to Chicago’s West Side where it has become a beacon of hope.

The school serves kids fifth through eighth grade, preferably lagging and struggling ones, for a $75 monthly tuition fee, although the cost to educate each student is $10,000 to $12,000 annually. Individuals and foundations subsidize the 102 students. Comer wasn’t just a benefactor to the campus but a “really important part of our school,” Donohue said.

“In honor of his memory, we want our students to be prime examples of giving back to the community,” said Donohue. “It’s the best way to honor him.”

To continue its mission to, “transform lives and neighborhoods,” the school will also hold its first Finding Solutions in Challenging Times Resource Fair May 4, and organizers hope community members will attend. About 25 organizations and city agencies will be at the school providing information on services including employment, mental health, education, youth opportunities and more.

It’s an opportunity to invite people into the Comer Campus, said Denise Smalley, coordinator of family services for St. Joseph Services, an outreach ministry serving at-risk families with an outpost inside of the school.

Smalley said she receives calls daily from people looking for help, and the fair is a “little grassroots effort” to provide aid and information. Smalley and co-workers Jon Ecker and Bradly Johnson started the effort, which has snowballed into a bigger event than she imagined.

“I hope a lot of families and community members come,” said Smalley. “We’re going to open the doors, and let the community take advantage of these resources.

“It’s really needed in Austin,” Smalley said. “People don’t know how to tap into these resources. They don’t think they exist.”

Between the resource fair and the day of service, it’s going to be a busy week of reaching out to the community for the staff and students at Comer. Alexus Williams, an 11-year-old sixth grader at the school, said helping out in the neighborhood makes her feel good.

“I accomplished something and want to make a change in the world to help out,” said Williams, who cleaned up garbage at last year’s service day.