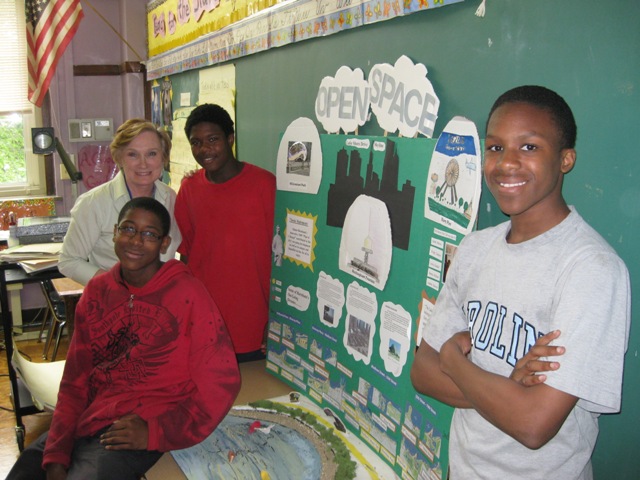 A few months ago, Karen Zahran’s students didn’t know much about open space. For the eighth-grade students at Austin’s Lewis Elementary School, parks were just a place for swings and litter.

But after creating an award-winning project for the Chicago Metro Junior History Fair, these teens are teaming with trivia about the city’s parkland:

Jackson Park – “It used to be called Lake Park; they changed its name to Jackson Park after Andrew Jackson,” explained Dareion Luckett.

Northerly Island and Meigs Field – “Mayor Daley didn’t want it to be an airport anymore, so he tore it up,” said Dashon Wright.

And the Bean -“It wasn’t built here. It was brought in pieces … like the Statue of Liberty,” reported Kendall Lewis. 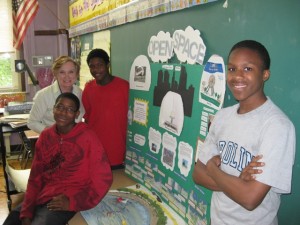 And they learned these parks didn’t just crop up out of nowhere.

“All that was created within the open space that (original city planner) Daniel Burnham created in 1909 in Chicago – his great Chicago plan,” said Michael Barnes.

The team, four of whom are students in Zahran’s special education class, chose their topic months ago – Burnham’s “Plan of Chicago” and its impacts on the city today.

They’ve been hard at work ever since.

Throughout the spring, the five boys met during free periods and went to the library to research on the Internet. An expert visited their classroom to talk to them about the history of open space, and the group took a field trip to the Chicago History Museum, where they interviewed a historian and pored over old photos and documents.

That field trip showed Zahran just how engaged the boys were.

“It was interesting because they found the Plan of Chicago (drawing) before I did,” said Zarhan, who has been teaching at Lewis since 2000. “They were saying, ‘Mrs. Zahran! Mrs. Zahran! We found it!’ They were so excited. They got out their phones and they were taking pictures, and I was taking pictures…” 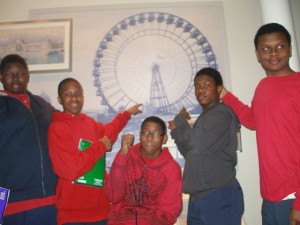 After months of research, the students got to work creating their presentation – a three-foot display board about Chicago’s beaches and parks. They met in the art classroom before and after school to create the project, which is accompanied by a model of the city’s lakefront (complete with sand and miniature bicyclists); a taped interview with the history museum historian; and a thesis statement – “Daniel Burnham’s 1909 “Plan of Chicago” contributed to the city’s on-going development as well as its unique and beautiful skyline for all to enjoy.

Their entry first went to the school’s eighth-grade history fair, where it was selected from 20 or so projects to go on to the citywide competition. And on April 17, the boys’ project was one of about 100 to be judged at IIT, where they competed against projects about the invention of the telephone, the Great Chicago Fire and the history of the bungalow.

The boys are looking forward to receiving their honorable mention certificates at Lewis School’s award ceremony next month. But the kids say the best thing about the project was the teamwork.

“I asked them, ‘What did you learn from that?’ Zahran recalled. “And Marcus said, ‘There were no egos. No one was better than anyone else. We all had our different strengths.’”