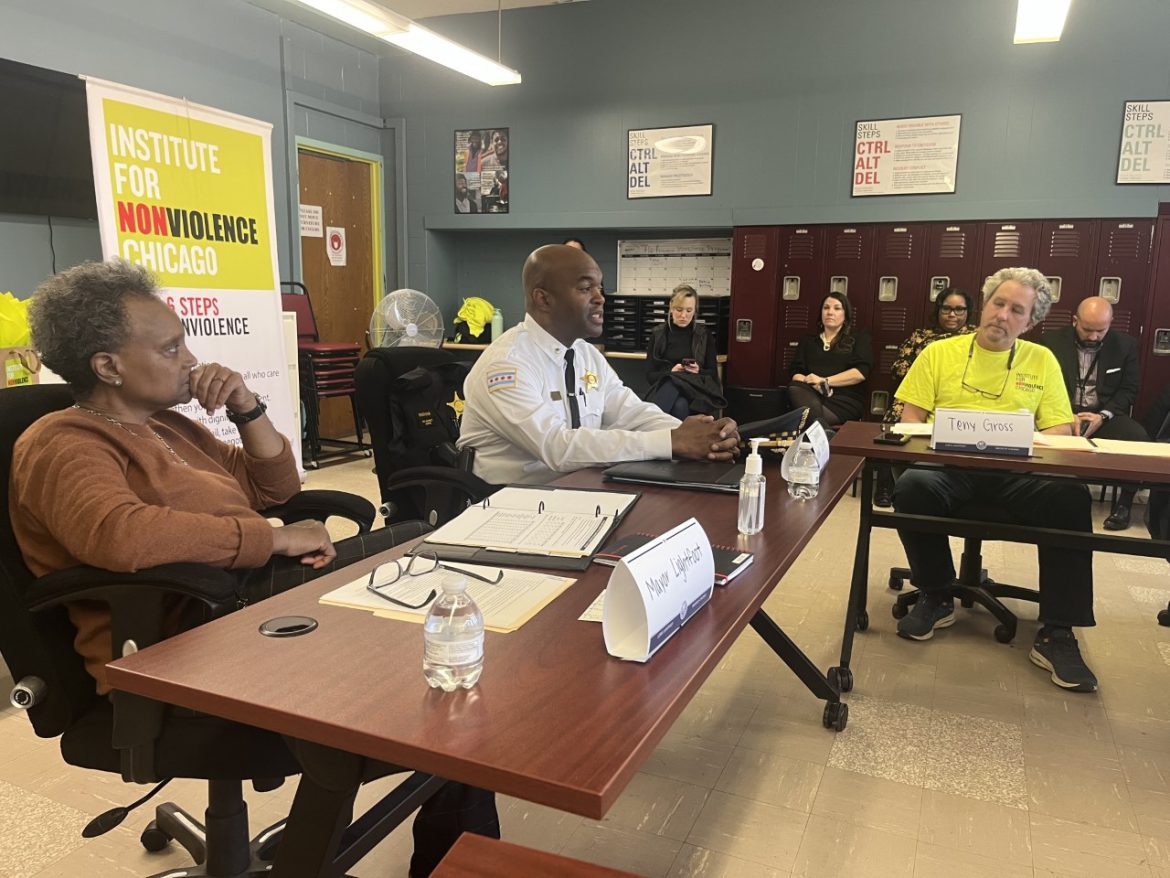 Mayor Lori Lightfoot was in Austin last week to talk about recent strategies she said have helped reduce violent crime on the West Side.

At the meeting – which included Lightfoot, 15th District Police Commander Andre Parham and representatives from the Institute for Nonviolence Chicago – the mayor referenced reports that show a drop in violent crimes, such as shootings, murders, and robberies in Area 4, which includes West Side Police Districts 10, 11 and 15.

“I think it’s the best that we’ve seen in 10 years,” Lightfoot said.

The most recent report shows decreases from last year in all categories except for theft, motor vehicle theft and criminal sexual assault.

During the meeting, representatives from the Institute for Nonviolence Chicago explained how in the last month, they have been working with the police department to curb violence through their street outreach and conflict mediation program.

“They have the ability to communicate and build relationships in a way that us, the police, we just can’t. It just is not possible,” Parham said.

Teny Gross, the institute’s executive director, at first didn’t want to work with the police, saying he was concerned about sharing information. Commander Parham agreed; their relationship only involves the police letting Gross’ team know about “hotspots” where institute workers can attempt to mediate.

“He believes in our potency, and I really believe in the potency of this team,” Gross said. “He doesn’t ask back for information. He just looks whether it’s calm or not.”

The institute pays people to work in hotspots, usually $100 a day to keep the violence down. Called the FLIP (flattening violence and inspiring peace) program, they operate in 88 different hotspots, said Sam Castro, the institute’s director of community violence intervention.

Since Memorial Day weekend, most of the hotspots have been calm: “Out of the 88 hotspots, we had no action in 83,” Castro said.

The program also creates non-aggressive agreements among rivaling groups to curb violence. Two agreements are in place with another – involving four groups spread from Austin to Cicero on Chicago Avenue – in the works, said Nekenya Hardy, the institute’s outreach supervisor for Austin.

Lightfoot wants to invest in long-term plans to reduce violence by targeting children ages 0-5 years old. If children aren’t ready to learn entering kindergarten, it’s a struggle for them to become confident readers and learners, she said.

“From kindergarten to third grade, you learn to read. From fourth grade on you read to learn. If you don’t have those fundamentals in place, it’s an uphill battle,” Lightfoot said.

The mayor wants to reach infants through a program called Family Connects Chicago. Chicago Department of Public Health nurses will check in on every baby within the first two to three weeks of birth to ensure their needs are met and if not, then the mother and baby are connected to services.

“I want to make sure that kids are not born not being taught to protect themselves against gun violence but being encouraged to be the best person they can be – to be able to live a ‘normal’ childhood without fearing being outside their homes, walking down their block, worrying about crossing gang lines,” she said.