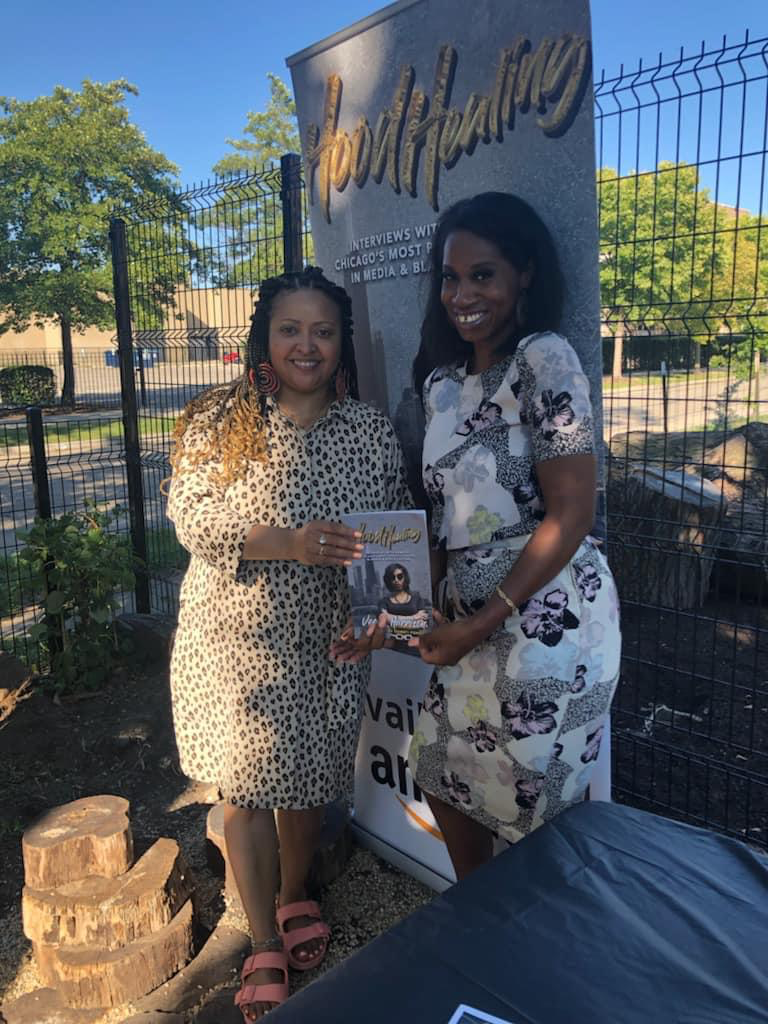 Every third Sunday of the month, the Front Porch Arts Center invites writers and residents to the the Westside Writers reading series. The reading and open mic event “serves as a sanctuary for artists and community members to share their stories,” said Keli Stewart, an Austin writer and educator.

Stewart is the founder of Front Porch Arts Center, an organization started in 2019 to showcase the history and culture of West Siders through the arts. A graduate of Columbia College Chicago’s fiction writing program, she said there are many writers from the West Side who have stories to share that show the impact of books and the arts in the community.

“We want to continue to create safe places to tell our stories,” she said at the end of last month’s event. “We need more spaces, we have so many West Side artists.”

The Austin branch of the Chicago Public Library, the event’s usual location, unexpectedly closed the day of the event. Instead, Harambee Community Garden opened its doors to the three creatives who shared stories rooted in their experiences on the West Side.

Davis said she did not discover her passion as a writer until she realized how much she enjoyed creating writing samples for her students. She then completed her master of fine arts in creative writing at National University.

“You can’t live in Chicago and not know someone who knows someone,” Davis said. Based on this, she said she wrote passages of this book that interconnected with her first book, “Underneath It All.”

Davis is the author of 16 titles, published in the span of 10 years. She has also written poems even though she “doesn’t claim to be a poet,” she said.

Meadows, born and raised on Chicago’s South Side, is a poet who uses spoken word and the creative arts as a means for activism in his community. He is a member of the National Alliance for the Empowerment of the Formerly Incarcerated and the Prisoners Neighborhood Arts + Education Project.

“So when I was 18 years old I was involved in gang-related crime, and I got out last year…” Meadows said. “The community is definitely impacted by violence in so many different ways.”

While in prison Meadows heard about community leaders who advocate for education and creative arts programs in prisons. He now works with the Institute for Nonviolence Chicago, based on the West Side, to provide services to victims of crime or family member and prevent the involvement of youth in violence using Martin Luther King Jr’s nonviolence philosophy.

In his piece “Inmate Appreciation Day,” he criticizes the criminal justice system based on his own experiences. Through this poem, he discovered his father was also a writer.

“My mother after she heard it, she was silent,” Meadows said. “I was like, ‘Why are you silent?'”

Harrison, a Chicago journalist and author of the book “Hood Healing,” read from her book. On the table behind, sat the photo of her brother Darry Anthony Harrison Jr., who lost his life to gun violence in 2021.

“My one and only brother, he grew up right in this neighborhood and he got killed, right?” she said.

“So I wrote Hood Healing because it was one of the last things my brother and I talked about. And I wrote it because it was a need to talk about what we do with trauma as Black people.”

Harrison, a graduate of the journalism program of Columbia College Chicago, shared some memories of growing up in Austin and her thoughts about the need to talk about the generational trauma experienced by Black people in Chicago.

Her work as a journalist covering community news and Black culture has further exposed her to the trauma caused by violence, food insecurity, disinvestment and police violence, among many other inequalities, in Black communities.

“And so I learned by losing somebody near and dear to me that in order to heal my hood, I had to heal my own.”