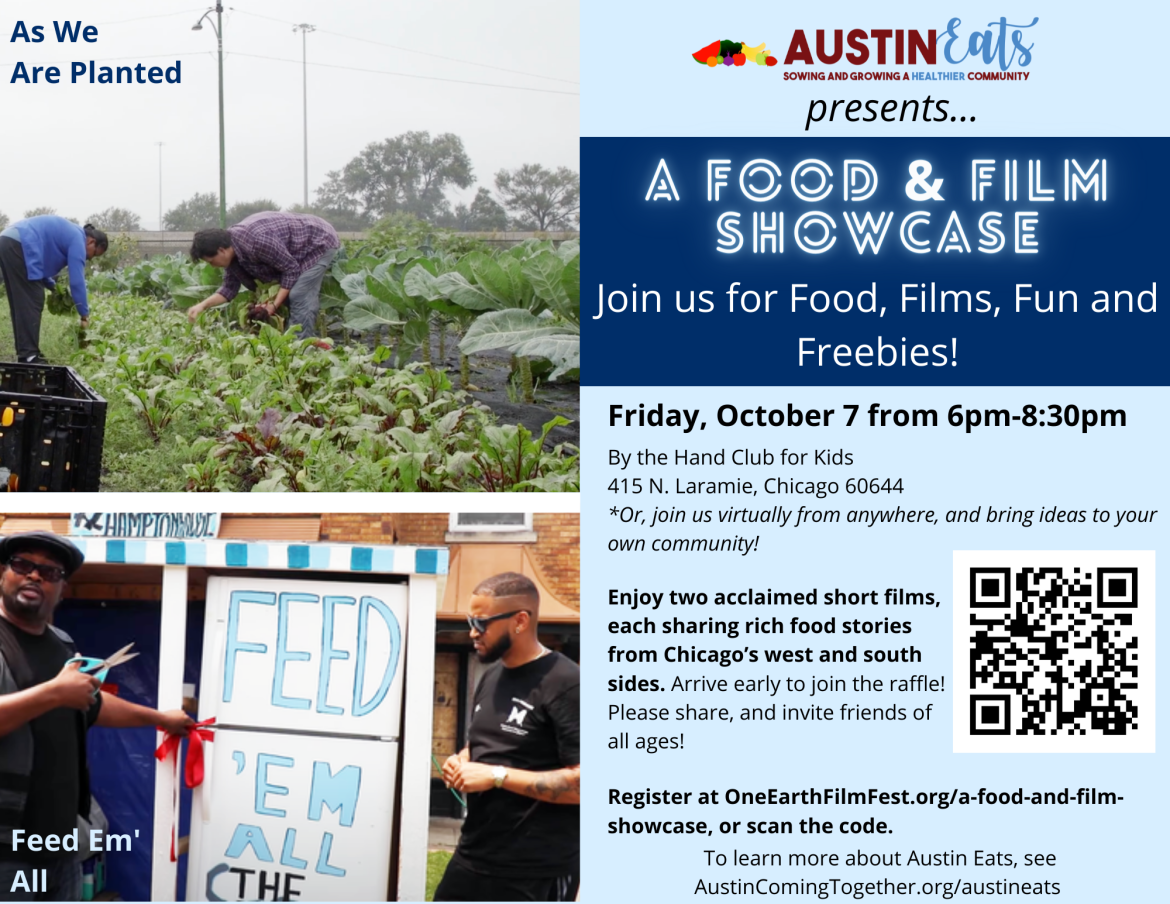 Austin Eats is hosting a free food and film festival with One Earth Collective Friday at 6 p.m. at By the Hand Club for Kids, 415 N. Laramie.

The event will include free food from Beyond Hunger and Vegan World Café, cooking demonstrations and a panel discussion. Two films centered around food inaccessibility will be showcased: “Feed “Em All” directed by Helen Quinn Pasin and “As We Are Planted” directed by Anna Lee Ackermann.

Ackermann’s film focuses on Chicago’s South Side and the Just Roots organization. Pasin highlights organizations in Austin, such as A House in Austin and Austin Harvest.

“I hope that it just prompts people to think what’s happening in their own communities,” Ackermann said. “I didn’t even know food apartheid was such an issue and it was happening a few blocks away from me.”

The panel will be led by Anthony Clark of Suburban Unity Alliance and includes community leaders featured in the films such as Fred Hampton Jr., Lynette Kelly-Bell of A House in Austin, a youth representative from Austin Harvest and Bri Kellogg of Beyond Hunger.

“I think that these events can really shine a light on who the experts in the community already are,” said Michele Zurakowski, Beyond Hunger chief executive officer. “Instead of coming in from the outside moving in, it’s more lifting up what’s already there.”

This event is another product of the Austin Eats collaboration led by Austin Coming Together and 22 other community groups. Their mission is to improve healthy food accessibility in the neighborhood. The goal of the event is to educate the community on healthy food options, said Ana Garcia-Doyle, One Earth Collective executive director.

“It’s wrapped in that kind of engagement piece so that people really feel it, experience it and want to take it home and want to make it part of their lives if it’s not already,” Garcia-Doyle said.

Beyond Hunger recently launched a health ambassadors program. Anyone can apply for the position to educate people in their community on nutrition and cooking.

Austin Eats continues its farmers market every Thursday until the end of October. A fall harvest festival will be held Saturday, Oct. 14.

“The good news is that there are a lot of good organizations out there … who are taking action and helping to make food accessible and sustainable within a community,” Ackermann said. “It’s just a matter of doing a little bit of digging and finding those people who are already doing the good work.”