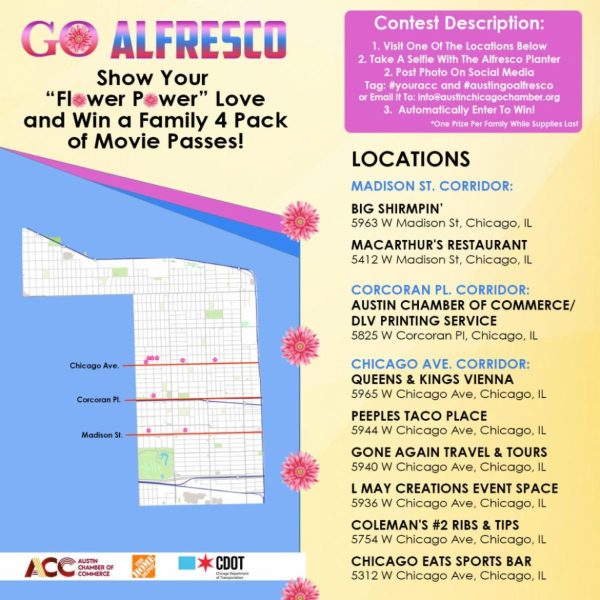 The spotlight is on Austin and several other Chicago neighborhoods as the city celebrates “Taste of Chicago Alfresco Week” through Oct. 16. Residents are encouraged to dine out at restaurants along West Madison Street and West Chicago Avenue.

Sixteen neighborhoods have been awarded grants to expand opportunities for outside dining through the Chicago Alfresco program. The grants have been used to create public seating, plantings, kiosks, performance spaces, murals, art installations and programming throughout the city.

When the program was announced last year, Austin business leaders lauded its launch.

“A spotlight will now be on the rich arts and cultural community that exist in this neighborhood while enhancing the curb appeal of restaurants and creating an enjoyable and relaxing atmosphere outside of those restaurants.”

The Chicago Alfresco program is part of the Chicago Department of Transportation’s goals of improving streets and the public way.

“The new installations throughout Chicago will allow residents and visitors to come together and enjoy the neighborhoods’ food, arts and culture in a shared space,” CDOT Commissioner Gia Biagi said in a statement.

Grants were provided directly to chambers of commerce and other neighborhood community groups to create outdoor activations that fit the needs of the local community.

The Choose Chicago Foundation provided a total grant of $2.5 million to activate the 16 community locations, thanks to a donation from Diageo North America, owner of brands such as Guinness, Smirnoff and Crown Royal.