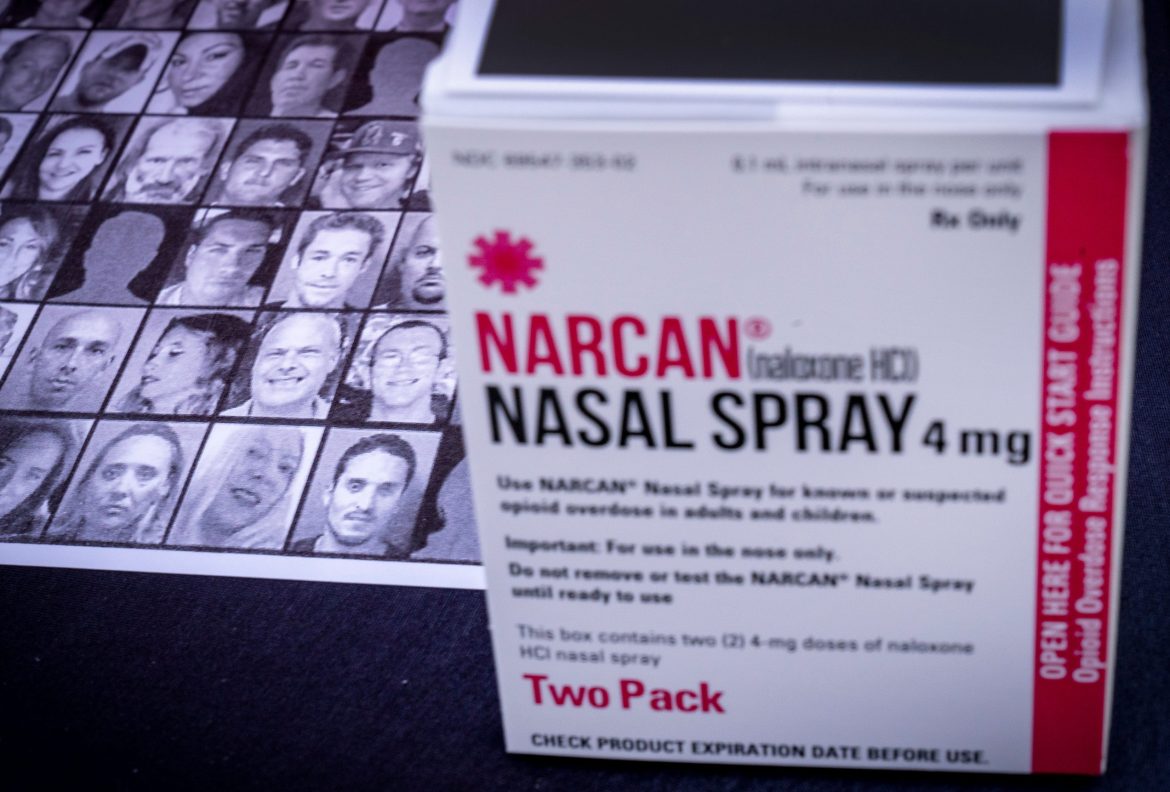 Photographs of lives lost are next to free boxes of Narcan nasal spray that were given away during a rally and candlelight vigil on January, 20, 2022 in Palm Beach Gardens. The group is asking for Palm Beach County Sheriff's Office to require its deputies to be equipped with Narcan, a medication designed to help reverse the effects of an opioid overdose in minutes.

Last week, at the corner of Jackson Boulevard and Pulaski Road, West Side residents and health providers gathered to commemorate the third annual International Overdose Awareness Day. That corner has been a hot spot for drug overdoses.

“It is very purposeful and intentional to have our event there,” event organizer Sandra Harrison said.

Most every tent was providing free Narcan to attendees. Narcan (also known as naloxone) is an opioid overdose reversal agent, usually administered via a nasal spray, that is easy to use and can save a life.

“We offer a few moments of hope and inspiration for sobriety,” Harrison said.

The Loretto Hospital and Maryville Academy celebrated the day – Aug. 31st – with free Narcan training and distribution. Maryville plans to host more training sessions throughout the city and suburbs the rest of the year, said Fred Smith, Maryville director of community services. They’re especially interested in training the friends and loved ones of those who are addicted.

“Mostly, it’s someone with a close relationship with the person overdosing. So, we want them to not feel afraid to administer Narcan,” Smith said.

The training covered overdose symptoms, so people know when to act. Symptoms include slow breathing or snoring; no response when shaken or their name is called; lips or fingers are blue; skin is pale and cold; and pupils are small.

“We distribute naloxone in the ER, so, patients get education and training and leave with it in their hands,” Carey said.

Narcan can cost $50 per box, which contains two doses. But organizations who want to distribute the drug for free can get it through the Illinois Department of Human Services and Substance Use Prevention & Recovery.

Maryville operates in Austin at the St. Josephine Bakhita Recovery Home, a program for mothers struggling with addiction. They often make referrals to Loretto.

Family members attended last week’s trainings. Ex-Cons for Community and Social Change were also there to get their whole team educated.

“We are a boots-on-the-ground operation …We need the training because we are on the streets,” said Solomon Montagueo, Ex-Cons for Community and Social Change community servant.

The non-profit has an emergency response program of trained volunteers who assist in emergency situations.

“Narcan is like car insurance: You hope to never use it, but it is nice to have,” said Nancy Woulfe, Maryville director of business development.

In Oak Park, another event took place where state Rep. La Shawn K. Ford shared his personal stories of lost loved ones to overdoses; the Austin lawmaker has lost both an uncle and cousin.

Ford is the founder of the West Side Heroin/Opioid Task Force, which has ties to Loretto Hospital and partnered with the event at Jackson Boulevard and Pulaski Road.