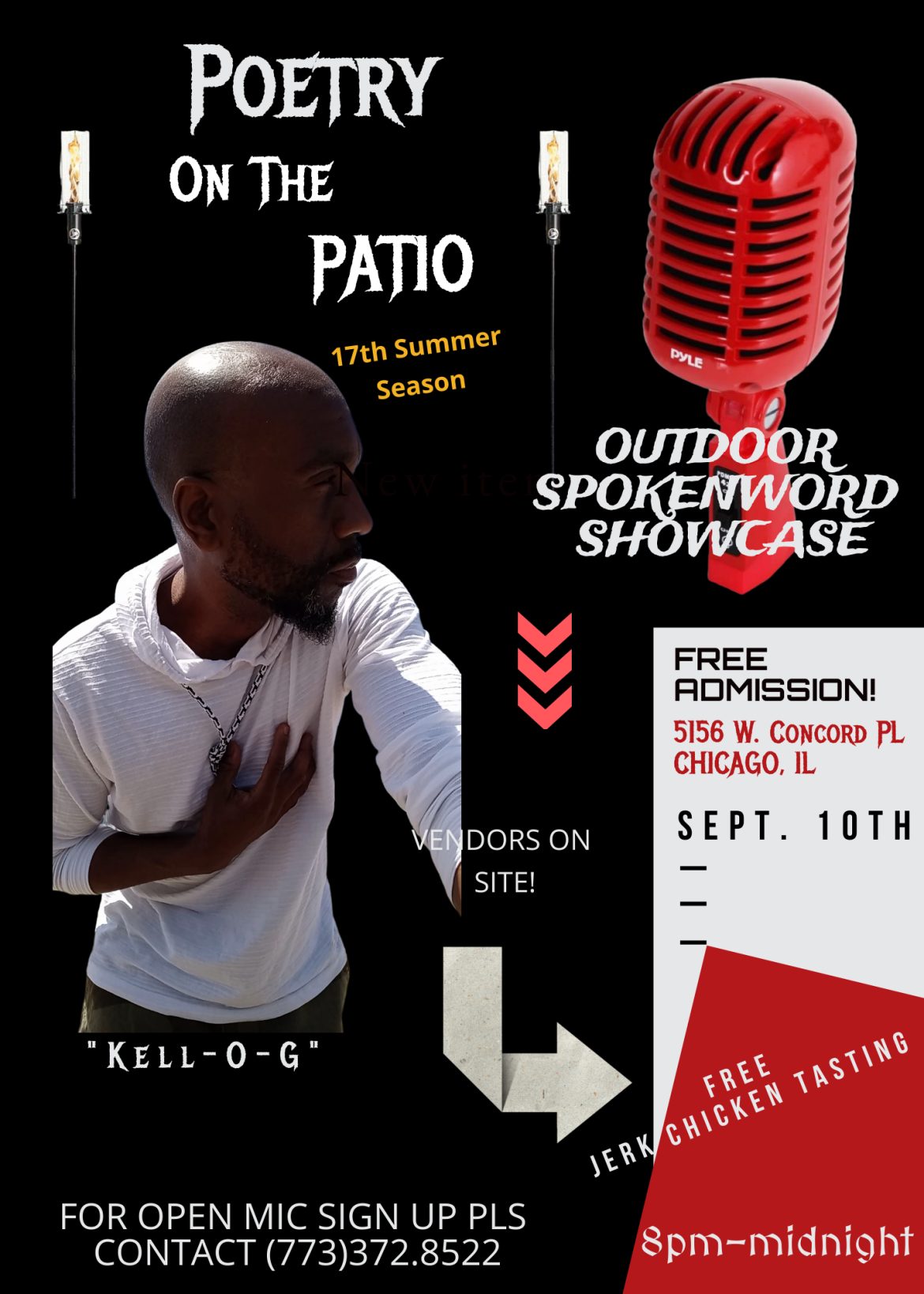 Poetry on The Patio, one of the longest-running outdoor spoken word shows in Chicago, made its comeback Saturday after a two-year hiatus.

“I’m excited about it. It’s just that rush you get for just being able to host and just be this humanitarian,” Mooney said before Saturday’s event. “Just bringing people in for three or four hours, just keeping them safe and engaged in some beautiful words. I think that’s just like the ultimate goal.”

With the pandemic receding and patrons and artists asking about the next show, he “felt the spirit was right” and decided it was time to bring the open mic show back to the West Side.

“I just got a little poetry going, and I just felt like, you know what we gotta do. We just have to do one … put one in the books for the summer,” Mooney said. He added his mother, who has helped produce the event at her home, immediately agreed.

In past years, Poetry on the Patio has provided people and artists from the community with a safe space to share their spoken words on stage, enjoy a meal and connect with other people.

Chicago poet Pierre Butcher “DarkChild” said he was “ready to see Chicago come out and show out” for a family-oriented event filled with “good vibes and great artists.” Butcher co-hosted the event.

Poetry on the Patio is also a platform for artists, those just emerging and the more experienced, to “share their words,” Mooney said.

Being an open mic event, anyone who wants to share a poem or spoken word piece was invited to get on stage, even if it was their first time.

“My advice for them is that no one is above anyone at this point,” Butcher said. “This is spoken words. Your views and opinion are yours … If you feel like you wanna get on stage for the first time, go out and do it. You might not know it, someone might need to hear your words and your heart.”

While Mooney is not new to spoken word, he planned to return the stage to debut a few new pieces “he’s been dying to share with the audience,” he said. Some of his lines from his book Words of Life “just might pop out a little bit during the show.”

“We have so many vendors in Chicago that are not being recognized in the correct way, so we’re giving them the opportunity to show out their product,” Butcher said.

Tami Yarborough, owner of Cheryl Renee’s Things, designs handmade jewelry she sells at her boutique. She said the COVID-19 pandemic caused her to restructure her business, so she added clothing, accessories and shoes. She also offers hair design services and temporary tattoos, so anyone coming to the boutique can get a full makeover.

Poetry on the Patio will be featured on the show Community Essentials, which airs on Comcast’s Access Channel. Yarborough will be in charge of recording the event through her media production company T Lynn Productions.

Yarborough said since its creation, the show has focused on showcasing people in the community, artists and resources “to bring people awareness of what’s happening in their communities.”

Poetry on the Patio is about “cultivating community and bringing people together,” she said.

Mooney also said he is excited to let attendees know that earlier this year, the Grammy Academy announced a new category to recognize the Best Spoken Word Poetry Album. Well-known Chicago poet J. Ivy, who was nominated for the 2022 Grammy in this category for his Catching Dreams: Live at Fort Knox Chicago album, shared the announcement on his social media, where Mooney saw it.

“It’s just so good to announce something like that because it’s historical,” adding he wants to let poets and artists who attend the event on Saturday that they could get their work submitted and possibly nominated for the Grammy. “I’m excited to get in the studio myself and see if I can get something in.

“The whole main mission is just to bring people back in a safe environment and just to give them that sense of a family [gathering], like you goin’ to a backyard barbecue, you know, with your auntie, your aunt or uncle … But with that sense of they get the poetry, they get the spoken word, they get the pure essence of a performance through the artist’s poetry.”