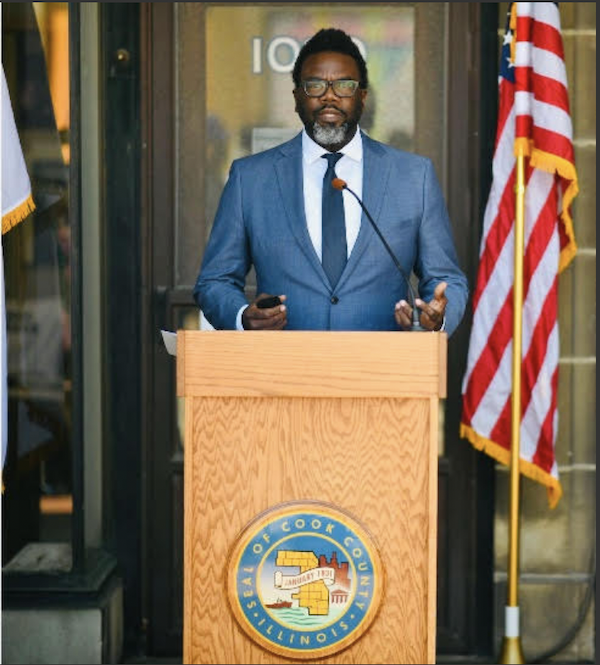 Cook County Commissioner Brandon Johnson said the $75 million in funding was targeted to benefit those "most impacted by the failures of the past."

Several Chicago’s West Side organizations – including BUILD Chicago, New Moms and Manufacturing Renaissance – will benefit from $75 million in funding from Cook County that will support programs working to reduce and prevent gun violence.

The local organizations were awarded multi-year grants ranging from $1.2 million to $15 million that will be disbursed in several installments over the next three years, starting this month.

Community areas that have endured the highest rates of gun violence were prioritized, according to the Cook County Board of Commissioners.

In an interview with AustinTalks, Cook County Commissioner Brandon Johnson said in determining those that would benefit the most from the grants, the first thing taken into consideration was “who’s most impacted by the failures of the past.”

“That’s an important part of our frame because we’re talking about equity and justice,” Johnson said. “We have to distribute the resources to communities that have been most harmed by disinvestment and, quite frankly, had been harmed by the reliance on surveillance and incarceration.”

BUILD Chicago, in a coalition with the Covenant House of Illinois, United for Better Living (UBL), Blocks Together, and MAAFA Redemption Project, was awarded $15 million for violence prevention and trauma-informed services for victims of violence in Austin, Garfield Park, and Humboldt Park.

“As we know, community-based work is one of the most effective ways to combat gun violence,” BUILD’s chief development officer Kirsten Mallik said. “And what this grant is intended to [do is to] extend and amplify all of that work.”

To prevent at-risk youth and adults from engaging in violence or being the victim of gun violence, BUILD and its allies will continue to provide an array of services that include mental health, crisis intervention, violence intervention, workforce development, housing, youth mentorship, education and outreach.

“There’s a misconception that these things already exist, so we don’t need more of it,” Bradly Johnson, BUILD’s chief community officer said. “But those of us who are on the ground doing the work, we don’t have enough.”

He said often organizations like MAAFA Redemption Project, Blocks Together and even BUILD lack the human capital and resources to scale their programs. With this grant, their goal is to reach around 1,900 West Side residents over the next three years.

“It’s joy, you know, it’s excitement and it’s the chance to execute plans you’ve had for a long time,” Mallik said. “You know, as Bradly says, the need is huge, the need is overwhelming, and this is such a strong step in the right direction.”

New Moms, another Austin-based organization supporting young mothers and their families, is the recipient of a $1.45 million grant to support their workforce development program for moms ages 24 and under.

In the 16-week-program, young mothers get help in planning their careers, develop professional skills needed for their careers, work transitional jobs and receive support to find permanent employment opportunities and stable childcare for their kids.

“The power of providing this kind of service to our young moms is that it will increase their own potential for economic mobility, for housing stability and overall family well-being,” New Mom’s director of development and communications Jenna Hammond said.

With the grant, New Moms will increase the annual number of young moms who participate in the program to 105 participants from the 75 it currently serves. Hammond said after the organization had to decrease the number of families that were served because of the COVID-19 pandemic, these funds will help bring back these services.

Fifty percent of New Mom’s participants experience homelessness, 70% report histories of domestic violence and sexual abuse and 100% report trauma histories, Hammond said. When young moms are able to find stable and permanent employment, they are more likely to have the financial resources to live in a safe environment for them and their children.

“Austin is, if not the, one of the … largest neighborhoods of Black people anywhere in the country. And our lives matter,” Commissioner Johnson said. “And that’s what these investments are designed to do … to demonstrate in a real way, that our lives matter.”