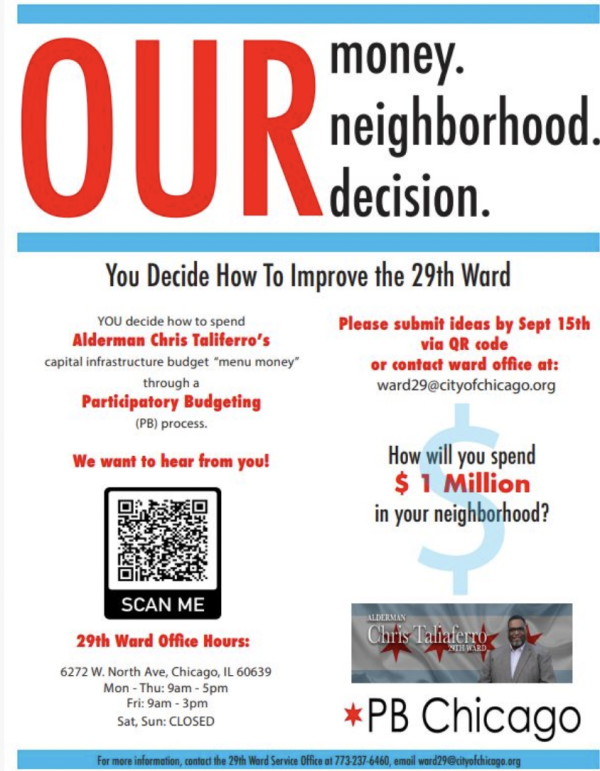 West Side residents can still submit project ideas for this year’s participatory budgeting cycle, the process that lets residents decide how the ward will spend $1 million of aldermanic menu money.

“We are about to end idea collection [phase],” said Byron Watson, director of infrastructure and special projects for the 29th Ward. “We want to engage our constituents [and] listen to them.”

In this phase, all residents of the ward – regardless of age – can propose ideas to improve their community using the annual menu money allocated by the city. Residents can share their ideas with the ward through an online submission form or by calling the 29th Ward’s office until this Saturday, Sep. 17 .

The original deadline – Sep. 15 – was extended to give more residents an opportunity to express their needs, Watson said.

“No idea is a bad idea,” Watson said. “We just have to figure out if that idea can be funded with menu money.”

It is the city of Chicago’s Office of Budget and Management that determines which projects can be funded through menu money, as these funds are part of the city’s capital improvement budget.

Menu money can be spent on park improvements; sidewalk improvements and repairs; lighting and signs; public art; street resurfacing; and beautification. Every year, the city of Chicago allocates $1.5 million in menu money to each of the city’s 50 wards.

“I always have to make sure that these projects are done equally, and that’s kind of the role that I play … just be the neutral partner for both the alderman’s staff and the residents because they each have their own needs,” said Norma Hernandez, community development planner at UIC Great Cities Institute. “And sometimes you can get contentions.”

After finalizing the idea collection phase, all ideas will be analyzed and evaluated by community representatives and the ward’s staff to determine if they are eligible for menu money and if they are viable.

Only viable ideas that can be funded through menu money will make it to the ballot, Watson said.

Later this year, ward residents will vote to determine the winning project or projects. Residents will also decide how much menu money should be spent on street resurfacing, a priority for Ald. Chris Taliaferro (29th). Watson said the alderman’s office needs a floor of at least $600,000 and wants residents to determine if they would like to spend up to $1 million on street resurfacing.

“It gets them thinking about how money is allocated,” Watson said, adding that participatory budgeting helps educate residents on what local governments have to consider when making funding decisions.

If more money is allocated to street resurfacing, then less money is available to be spent on the projects proposed by residents, Watson said.

Thea Crum, associate director of the Neighborhoods Initiative at UIC Great Cities Institute, said residents involved in PB also learn what government officials need to do to finalize a project.

“I think sometimes when you’re outside of government you’re like, ‘Why doesn’t that just happen? Why can’t you just do that thing?'” she said. “And then, when you’re actually part of the power of PB, you’re not just saying, ‘I want to see this,’ and then expecting someone else to do that work. You’re actually working hand in hand with government.”