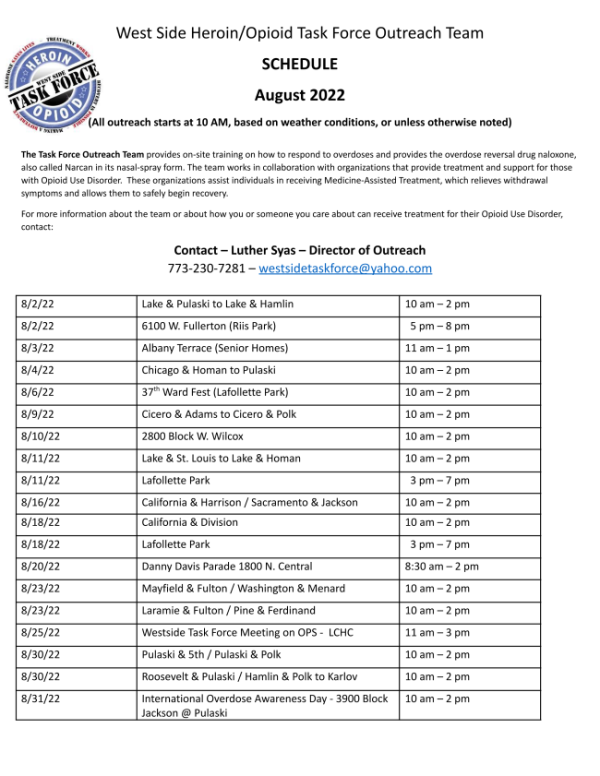 State Rep. La Shawn K. Ford has introduced a bill that would allow people to safely inject illegal drugs under supervision. Ford hopes the Illinois General Assembly will pass the bill this fall during its veto session and that a location will eventually open on the West Side.

Overdose prevention sites provide a safe and hygienic place for people to use pre-obtained drugs under supervision of medical staff trained in overdose reversals.

HB110 – also known as the Safer Consumptions Services Act – failed to gain support in Springfield, as it proposed to create overdose prevention sites statewide, so now Ford is aiming for sites only in Chicago.

“We know that anyone that goes into these places to use, we know that it’s almost 100% chance that if there’s an overdose, it won’t be fatal because someone will be right there to reverse it,” the Austin lawmaker said.

About 50 organizations support the bill and plan to help roll out the first location if it becomes law; the groups include Thresholds, Illinois Harm Reduction & Recovery Coalition and Rush University Medical Center.

The bill would establish the Illinois Department of Human Services as an adviser with research, rules and development. The department predicts overdose prevention sites would decrease the number of needles found in public spaces.

There would be fewer people on the street actually dying “right before our eyes, getting high on the street where our kids and families actually see it,” Ford said. Instead, people using drugs will “go into a safe place, and now we have a better situation, and we are able to help people and meet them where they’re at.”

One concern is getting law enforcement on board with the bill. Ford points to the rise in fentanyl-related deaths as a reason some will back the proposal.

“We know if we put a safe consumption site out in the community, that’s a guarantee of help to the city and to people” who are impacted, Ford said.

Opening a location on Chicago’s West Side is a top priority for Ford. The Illinois Department of Public Health has determined that Austin, West Garfield Park and Humboldt Park have the highest fatal opioid-related overdoses in the city, with 91 deaths reported in the first half of 2021. Austin was the highest with 39 deaths.

The West Side Heroin and Opioid Task Force, an organization Ford co-founded, currently operates a tent to aid drug users. The tent, located in a parking lot at Pulaski Road and Van Buren Street, is open Mondays and Fridays from 11 a.m. to 4 p.m.

Friday, Gov. J.B. Pritzker announced Illinois will receive $760 million from the national opioid settlement. The money will go to harm reduction and recovery services. An advisory council will decide where to distribute the money this fall, taking into account locations where opioid usage and deaths are most prevalent.

Residents can learn more at a community awareness event being held Aug. 25 event, being organized by Sue Pickett, deputy director of Advocates for Human Potential. The meeting will be held at the Lawndale Christian Health Center from 1 to 2:30 p.m.

Pickett said a recent survey found a majority of West Side residents agree an overdose prevention site would save lives and create safer neighborhoods.

Rep. Ford said lawmakers need to act to save lives: “It’s malpractice as the government to not help people where they’re at.”