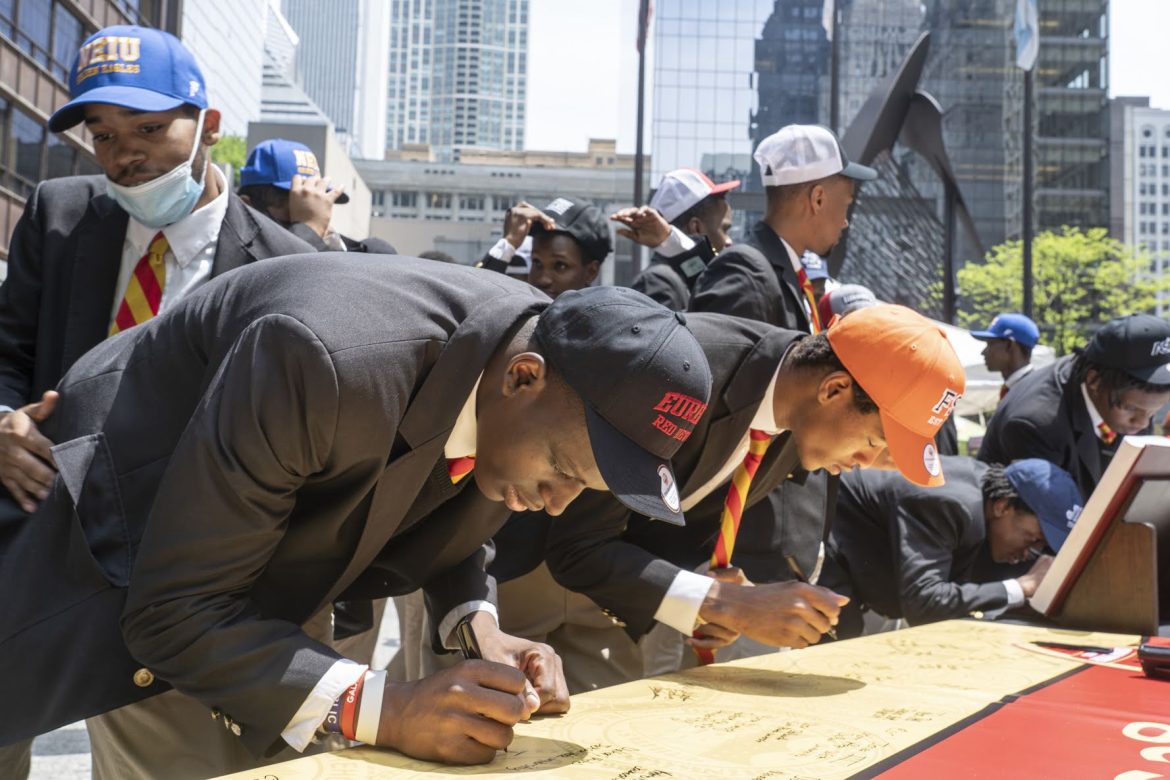 High school graduation is an important milestone. For Davion Johnson, an honors student from Austin, it was the moment he’d been waiting for “all his life.”

Johnson, one of about 160 young men who graduated this year from Urban Prep Charter Academy for Young Men, was the valedictorian of the high school’s downtown campus, an achievement he still savors as he heads off to college this fall.

He joined his fellow seniors in May as they celebrated Urban Prep’s annual “signing day,” held at Daley Plaza, where each announced their final college choice.

How many students actually attend college and complete their degree is unclear, which has drawn scrutiny in the past, as reported by WBEZ Chicago.

This fall, Johnson will head to Southern Illinois University in Edwardsville to pursue a degree in business.

“I will be [a] first-generation college student,” he said. “It feels good’ cause that means I’m giving hope to my younger siblings that they can go to college also and they don’t just have to stay at home.”

Johnson’s three older siblings did not go to college, so he hopes to set an example for his four younger siblings. After college, he aspires to operate his own business. “Whatever you have your mind set on, you should go for it.”

Urban Prep schools help students prepare for college through their college-prep curriculum. Johnson said his composition teacher helped him identify the college that would be “a good fit” for him.

Fellow graduate Justin Ke decided on his major after a school fieldtrip to a law firm his sophomore year. He remembers different staff members talking about their jobs.

“Some of them sounded boring, but it was one that was like, it got interesting to the point that she was done, but I wanted to know more of what she did,” Ke said. “And that was computer forensics.”

He will be attending Jackson State University, where he’ll study computer forensics. The Austin resident chose Jackson State with the help of his college counselor, who helped him find a school that offered the degree he wanted and where he could play lacrosse.

Graduating senior Ethan Ware, who also grew up in Austin, will attend East West University to major in business. Ware said he was encouraged by his mother and grandmother to go to college.

Ware said he would like other students still in high school or already on their college journey to remember to “always keep an open mind to what you what you believe in and what you want to accomplish.”

Founded in 2002 by a group of African-American leaders, part of Urban Prep’s mission is to prevent students from falling “into the trap of negative stereotypes and low expectations.” Students are easily distinguishable by their uniforms: khaki pants, a black blazer and a red tie they wear to school every day.

Urban Prep has been under fire in recent months after WBEZ Chicago reported CPS’ concern about Urban Prep’s financial sustainability. And earlier this month, longtime leader Tim King was forced out after an investigation into sexual misconduct, which King denies.