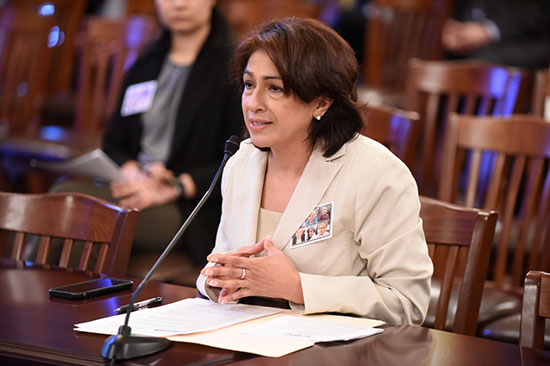 To be clear, it doesn’t matter to me if the head of the Democratic Party of Illinois is Black, white, Latino or Asian. The best person for the job should be in that position.

What is deemed best for the job is in the eye of the beholder and is actually determined by those in power. My opinion doesn’t matter, given that I am not an elected official, and I don’t have the resources to buy an election or sway the masses.

Having written that, I am feeling “some kinda way” about the selection and ultimate election of state Rep. Elizabeth Hernandez as the new chairwoman of the Democratic Party of Illinois. Her backers say she has vision and the ability to expand the party’s base, and she’s dedicated to building a party based on diversity and inclusion.

Given the manner in which she presided over the last redistricting process for the Illinois House, I am not convinced her vision includes expanding the base of Black Democratic voters.

I had a chance to participate in most of the redistricting hearings for the Illinois House and Senate. I was very disappointed that, under her leadership, the initial round of public hearings for the Chicago west region included hearings in Cicero, Berwyn and Humboldt Park but not for any predominantly Black communities on Chicago’s West Side, when Black people stood to be the most negatively impacted by the redistricting process.

I signed up to participate virtually for the Cicero hearing and was never allowed in the Zoom room. Illinois African Americans for Equitable Redistricting had to coalesce with other groups to lobby for the State Legislature to hold hearings that were accessible for Black voters in Black communities on Chicago’s South and West sides. The House and Senate Redistricting committees did a poor job of outreach to the Black community.

There was no reason to cut the number of majority Black districts in half.  The language we used to voice our concerns was co-opted to justify drawing maps that diluted the Black vote.

If the manner in which Rep. Hernandez managed the redistricting process is any indication, I am not optimistic about the degree to which her vision includes more outreach to Black voters. Our turnout in some communities was only 10% this past election, and I’m not sure she is the person to help energize Black voters during these crucial elections to come.

Valerie F. Leonard is convener of the Illinois African Americans for Equitable Redistricting (IAFER).  IAFER is an ad hoc group of nonprofit leaders, business owners and civic leaders whose purpose is to ensure the Illinois redistricting process is implemented in a manner that is equitable to all, while taking into account issues of concern to Black people around the state. She is also the founder of the nonprofit Utopia LLC.