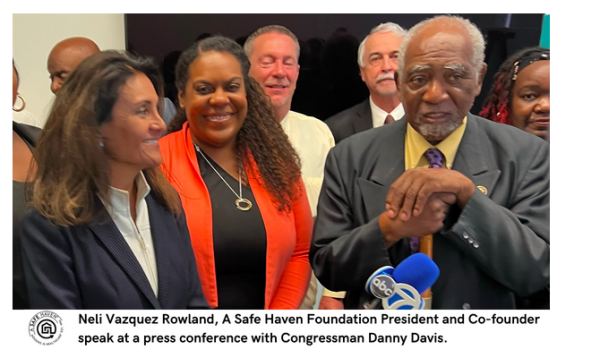 A Safe Haven, a group that helps people experiencing homelessness, has been awarded a $2 million grant to open a behavioral healthcare center in North Lawndale.

The non-profit is one of 25 groups in the 7th Congressional District that will be sharing in over $26 million in federal funding, Congressman Danny K. Davis recently announced.

Davis made recommendations to the U.S. House Appropriations Committee from a pool of about 100 proposals submitted by non-profit and government agencies in the 7th District. The grants are more commonly known as “earmarks.”

The congressman explained the sometimes controversial process in a recent interview: “What it’s really saying is that the members of Congress should know and have a better understanding of the programmatic needs of their districts than anybody else.”

Davis, who made the announcement just days after winning the June 28th primary, hopes the grants will be provided again next year and “perhaps will go up a little bit.”

A Safe Haven helps people become self-sufficient through housing, job training, behavioral health and more. The organization is turning its now-closed COVID medical center into an outpatient behavioral healthcare space. They plan to open by this fall or winter.

The center will accept walk-ins and provide doctors, psychologists and case managers to people experiencing addiction and mental health issues.

“The closer we can get to the root cause, the earlier we can get to people that are facing any kind of trauma or mental health issues, the faster we’re going to be able to get them back on track,” said Neli Vazquez Rowland, president and co-f0under of A Safe Haven.

The grant will help the center pay for technology, staffing and patient costs since their services are free.

“Prior to the pandemic, we were helping about 5,000 people a year, and we were turning away about 1,000 people a month,” Rowland said. “This behavioral healthcare space is probably going to allow us to, let’s just say conservatively, help about 2,000 people more than we could before.”

A Safe Haven recently opened two more housing locations for veterans, one in Lawndale with 90 units and the other with 75 units in Hobart, Indiana. Rowland said housing is still a major concern as inflation remains high.

A Safe Haven has helped over 135,000 people in the 27 years it has operated. One of those people is Marshall Galbreath, A Safe Haven’s executive chef and culinary instructor. He found A Safe Haven through his veteran rep after being in prison.

“My whole thoughts about a shelter was a place where you go in you get a bowl of soup and they put you on a cot for the night, and the next morning they put you out, and I wasn’t doing that,” Galbreath said.

After seeing the many ways the non-profit helps people become independent, Galbreath stayed, and was soon hired in the food service department.

Twelve years later, Galbreath is teaching a culinary class to current residents of A Safe Haven. He finds joy in providing guidance to people trying to change their lives.

“What Safe Haven does is provide those cares and resources for [individuals] to be able to become self-sufficient. Family reunification was huge for me,” Galbreath said. “I think it needs to start there because we’re living in some challenging times right now.”