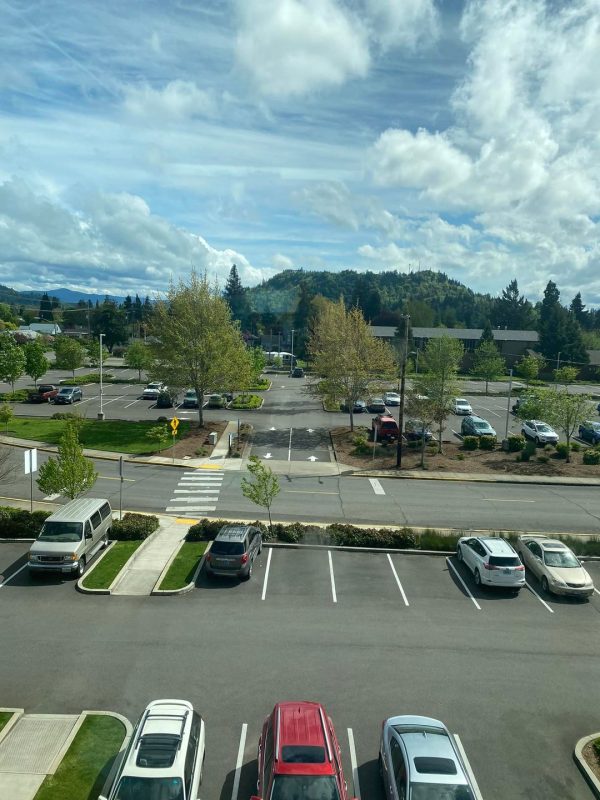 The skyscrapers are not man-made.

The plush hills in the distance surround the 15-minute ride to the hospital where I work in Springfield, Oregon. The forest greenery worshipping the grey clouds are a far cry from the ominous steel buildings of the Windy City.

The people are nothing like the diversity of neighborhoods known by their ancestry in Chicago.

I am a traveling social worker.

These last few weeks in the beginning of Mental Health Awareness Month provided a different outlook on what peace means to me.

I have been so conditioned to compete and compare. The next accomplishment is but a valley to the next achievement.

Flashing police lights and apps alerting to the next tragedy of homicide are less frequent to the chatter of the scanner in the 15th District police station.

The town where I work is predominantly white. Historically, it’s labeled a “sundown town.”

People like me don’t casually venture into these neck of the woods. If they do, often they are met with a stern warning of, “Best not be ‘round here after the sun goes down.”

As I stepped across the street in Springfield, Oregon, I was given this same warning by a car pulling out of a restaurant adjacent to the hotel.

“Be careful around here, black man!” he yelled out of his window.

I knew shit was real. The sun was still up.

My director and I engaged in a conversation about me being content in this assignment, and she asked for my honest opinion.

My tone is often soft. I can appear dismissive and unattentive. She misinterpereted  that as me being unfulfilled in my first contract as a traveling social worker. She was genuinely inquisitive.

I explained to her the trauma of being a Black male social worker and constantly self-tone policing. I described the passive aggression from doctors of Asian decent, the blatant refusal of nurses to follow simple prompts to assist in discharge planning. I described my 6-foot-2-inch, 285-pound stature.

“At any moment my tone rises or I become assertive, I am labeled as the angry Black man,” I explained. “Now, couple that with coming to a sundown town as your first contract assignment.”

“What’s a sundown town?” she asks in sheer ambivalence.

“Well, it’s when the sun goes down and you’re Black, you bets not be around these parts.”

Tears welled up in her eyes and flowed downward. She apologized having not understood the experiences and micro-aggressions Black men face, especially in the nurturing fields.

“How many of me do you see? I mean, the master-leveled Black male social worker just coming to town for a contract?”

I do not remember her answer.

The mental toll that it takes to navigate the world is stressful.

I can tell you that I have found my peace in writing once again.

Our whole team on contract consists of Black women, and I’m the only black male.

Your journey will lead you exactly where you belong even if just for 12 weeks.