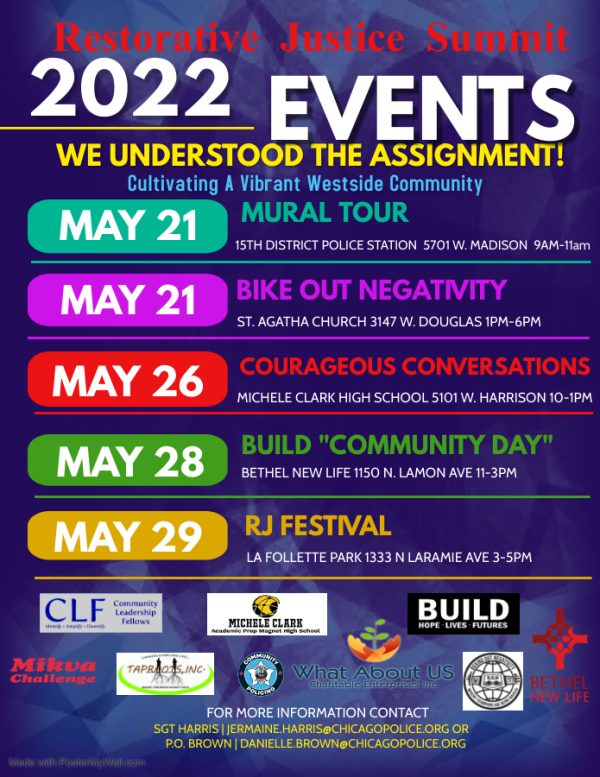 Austin residents are invited to participate in this year’s restorative justice summit organized by local groups and the 15th Police District. The hope is that the annual summit, which started last week and continues through Memorial Day weekend, will counter the violence that increases as temperatures rise.

This year, there will be an opportunity for elderly residents to share their experiences with young people in a peace circle. As part of the community day events that will be held Saturday, “Mississippi Migration Memories” will feature an intergenerational circle where youth can learn from the resiliency, courage and community-building stories shared by older residents, many of whom migrated from Mississippi during the Great Migration.

“What we want to hear is not only the struggle of coming from the south during the Great Migration but also the resiliency,” she said. “How did you cultivate community, how did you bridge gaps?”

Restorative justice is rooted in Indigenous culture; when a young person became unruly, they would come together as a village and as a community to encircle them, mentor them and guide them toward a positive path, Hamilton said. Austin’s restorative justice summit follows these principles.

“They didn’t call it restorative justice; it was a philosophy and a way of life. It was the way they interacted with each other. So they came together as a community and as a village to ensure that all in the community were well cared for.”

Participants also will be able to enjoy activities like yoga, meditation and storytelling focused on restorative justice. During the yoga and meditation sessions, participants will learn to “center themselves,” a practice that can help reduce violent behavior by teaching individuals, particularly young men, to take control of their emotions and channel them in positive ways.

A group of 12 to 15 Austin groups will also be at the event to engage and inform community members about youth summer programs, mental health resources and upcoming summer events. These resources will be offered to help residents to counter the trauma caused by the pandemic and gun violence, Hamilton said.

“If our residents are able to connect with them, it will help them address the trauma they have experienced personally or has surrounded them.”

“We know that drumming is very significant. [It] plays a very significant role to our heritage and our culture, it was a way to relay messages, it has been a form of entertainment, a form of expression, so that will be a [good] combination,” Hamilton said.

The celebration will continue on Sunday with a restorative justice festival at La Follette Park from 10 a.m. to 3 p.m. The festival will also feature food, music and peace circles open to all community members at no cost.

This year’s summit started last week with events that offered residents athletic and artistic experiences. Last weekend, young people had an opportunity to “bike out negativity” in a 6-mile bike ride organized by Boxing Out Negativity, a program that mentors at-risk youth through exercises like boxing or biking.

At another event held this week, students and other young people joined 15th District police officers in “courageous conversations” at Michele Clark High School. The event brought together police and youth people to have conversations in an environment that’s “less antagonistic.” The conversation focused on being courageous – whether that’s in a school environment standing up to a bully or in the police district standing up against officers who exhibit negative behavior.