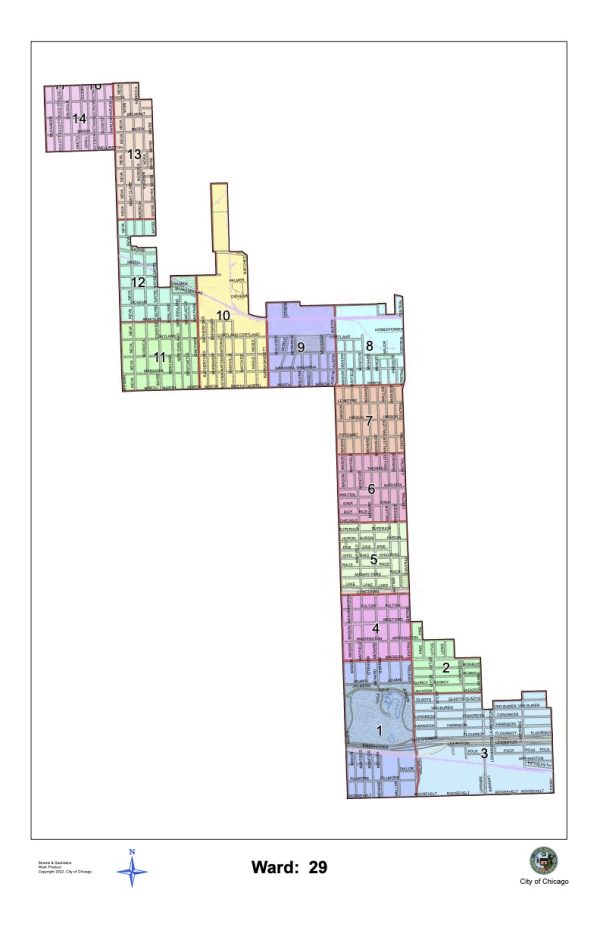 The city's street sweeping schedule for the 29th Ward.

A project for the property located at Madison Street and Central Avenue will be announced soon, Ald. Chris Taliaferro (29th) said at his monthly ward meeting held last week. Without disclosing more details, he said the project is an innovation center proposed by the West Side Health Authority and Austin Coming Together.

Several construction projects are underway in the 29th Ward and continue to move forward, Taliaferro said.

Construction for BUILD‘s community center at 5100 W. Harrison St. is underway. Progress continues to be made on Forty Acres Fresh Market‘ brick-and-mortar store that will open at 5713 W. Chicago Ave.

Ward remapping was also discussed at the April 20th meeting. Taliaferro said the proposed boundaries of the 29th Ward are still being adjusted, and he will attend a meeting with the Chicago Latino Caucus to define them. Taliaferro emphasized he does not support the Latino Caucus map, also known as the People’s Map, as it was proposed. The proposed map would extend the 29th Ward boundaries to include Humboldt Park.

“I can tell you that under the Latino Caucus map, the 29th Ward would change significantly,” Taliaferro said.

The demographic makeup of the 29th Ward would change by including the increasingly Latino population. “We would probably lose a Black ward in the city … It will be very difficult for an alderman, me, or any future alderman, to keep this as a Black ward,” he said.

If the Latino Caucus map is approved, Ald. Taliaferro could no longer be the alderman for the 29th Ward as his residency would be located outside the 29th Ward’s new boundaries.

“It’s all about representation, it’s not about color,” Taliaferro said. “I am concerned about finding someone and having an alderman that’s gonna have the people in their heart first and foremost, but I would not be able to be that person.”

Tina Augustus, co-founder of the Chicago West Side Chamber of Commerce, said the Latino Caucus map would “carve” resources out of the Black community.

Regarding public safety, Taliaferro said that the number of carjackings in the 29th Ward is decreasing, following a decline in murders and sexual assaults when compared to 2021. Yet, carjackings are still “occurring at alarming numbers,” he said. Taliaferro said residents should still be very careful, avoid leaving their car running and follow ordinary safety precautions.

In other news, Taliaferro reminded Austin residents that despite the mask mandate being lifted in Chicago, the COVID-19 pandemic is not over yet. Austin residents can continue to get KN95 masks, hand wipes and hand sanitizers at no cost at the alderman’s office on North Avenue.

“We still have a growing number of residents in the city and the county testing positive,” Taliaferro said, as he encouraged residents to “be as safe as possible.”

Taliaferro also noted that the Chicago Streets and Sanitation Department started street sweeping across the city on April 1. Street sweeping will continue until mid-November, requiring residents to pay attention to where they park. The street sweeping schedule for the 29th Ward is available on the city’s website.

The next 29th Ward monthly meeting will be Wednesday, May 18 on Zoom.