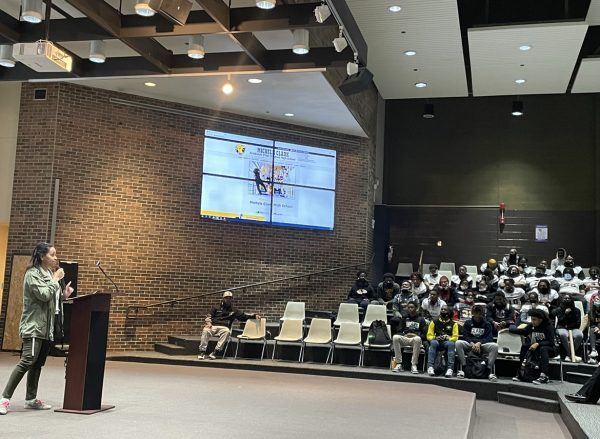 Students, parents and members of the Local School Council from Michele Clark Academic Magnet Prep High School asked CPS to consider their views regarding plans for property near the school at a recent meeting.

Students have been building community support through an online petition that urges the Chicago Board of Education and Chicago Public Schools to engage with students and residents as decisions are made about the property, located between the school’s parking lot at Flournoy Street and Lavergne Avenue, that CPS recently purchased.

“This issue matters to me and all of my community,” said Yafae Cotton, an honors student and athlete who ranks No. 1 in her senior class. “The Michele Clark community feels that CPS are not meeting those expectations with recent decisions being made with the land behind Michele Clark.”

LSC members showed their support of the students at a March 17 meeting.

“Look around because we are unified as a family, a community to say, ‘Hear our voices, let us be part of the process.’ Once again, we are grateful for the purchase, but we want to go along with the process,” said Johnny L. Matthews, who serves on Michele Clark’s LSC.

“Everybody [who is] here are not stakeholders, they are shareholders,” said Karl Brinson, president of the Chicago Westside branch of the National Association for the Advancement of Colored People (NAACP). “We are here to have our voices heard, we are here to be respected … we need to have ownership of what takes place in our neighborhoods.”

Michele Clark Principal Charles Anderson said the meeting was organized to hear the voices of what people want, what does that look like and what that really means for everybody.

“Tonight is about that, planning, developing and making sure we walk together in agreement,” Anderson said.

A CPS design manager presented the project plan for the Rockne stadium, a CPS-owned athletic facility located at 117 S. Central. The stadium is independent of the high school’s facilities and can be used by other Austin schools and organizations.

Also at the meeting were Chuck Swirsky, senior adviser to the CEO of CPS; Dwayne Truss, a member of the Chicago Board of Education and Austin resident; and Jamel D. Chambers, manager of intergovernmental affairs at CPS.

Community members interrupted the presentation to demand answers for the facility at Michele Clark High School, saying plans for Rockne stadium are great but were not the reason why parents and residents were attending the meeting.

Ald. Chris Taliaferro (29th) said despite his good relationship with CPS, he heard about the plans for Rockne Stadium after decisions had been made. He added that the community’s voice needs to be heard.

Anderson said CPS has no plans at this time for the property adjacent to the school. The next step in the property development plan is to gather the community’s input through an online survey, he said.

CPS representatives at the meeting declined to comment and referred questions to the Office of Communications for Chicago Public Schools, which did not respond to AustinTalks’ request for comment.