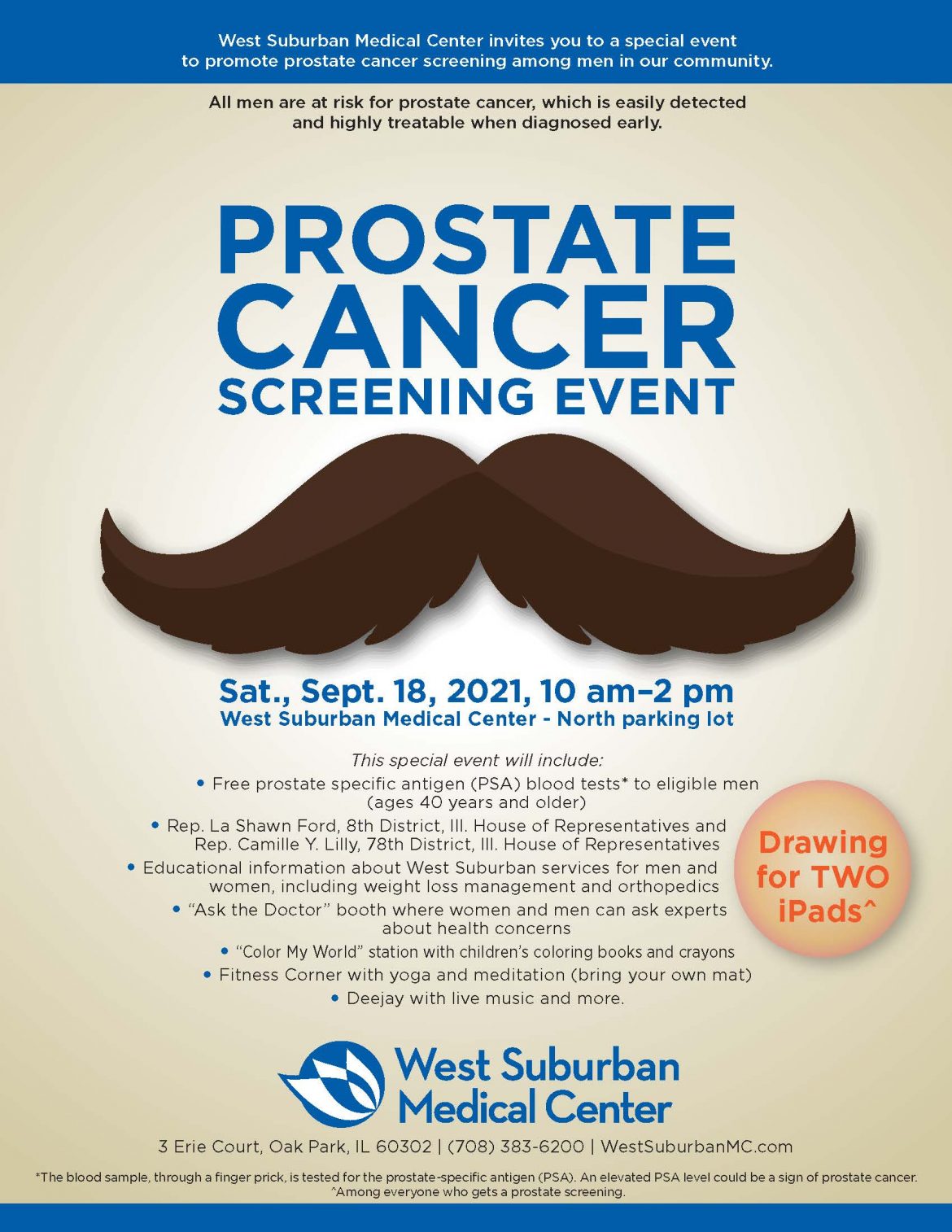 The prostate specific antigen (PSA) blood test will be provided to men ages 40 and up. Test results will be sent to patients early next week along with a referral to a urologist or primary care physician if needed.

“We see a lot of patients at West Suburban with prostate cancer,” said Barbara Martin, chief executive officer at West Suburban Medical Center. “We want to detect early and get them referred to a physician, so they get the healthcare that they need.”

Prostate cancer is highly treatable and has a 99 percent cure rate if caught early, according to the American Cancer Society. State Rep. La Shawn K. Ford, a recent cancer survivor, will share his story at Saturday’s event. Ford was diagnosed in October 2020, had surgery in January 2021 and is now cancer free.

“The fact that I was able to have a diagnosis early before it became terminal is a blessing,” Ford said. “Just another six months, and I would have had a different outcome. If you go to your doctor for a checkup, simply tell your doctor to add the PSA prostate exam to the blood work.”

Black men have the highest risk for prostate cancer and are 2.5 times more likely to die from the disease compared to non-Hispanic white men.

A 2019 oncology study, led by the University of Michigan Rogel Cancer Center, explored the high prostate cancer mortality rate in black men and found that “on a population level, the disparities in death rates appear to mostly, if not entirely, be attributed to external circumstances.”

“Doctors have to be sensitive to the different realities for Black men versus others,” Ford said. “People go to their doctors because they trust them, and it’s important that doctors are sensitive to the cultures that they serve.”

Ford, Martin and state Rep. Camille Lilly will also speak during a brief program at 11 a.m. In addition to the cancer screenings, Saturday’s event will feature an “Ask the Doctor” table, health and wellness information for men and women, free COVID-19 vaccinations, live music and a coloring station for youth.

“West Suburban is reengaging in the communities we serve,” Martin said. “We want to improve the healthcare of people from the Austin, West Side communities, Oak Park. The best way you can keep patients well is to do screenings, so that if they have an issue it gets solved right away and they get taken care of.”