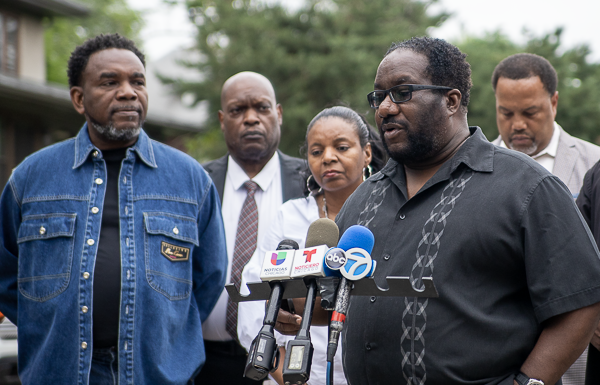 Rev. Ira Acree (left) and Rev. Marshall Hatch Sr. speak Thursday near the site where the 15th District police commander and a sergeant were shot over the holiday weekend.

West Side faith leaders gathered Thursday, in the wake of Chicago’s most violent weekend this year, to call on institutions, including their own, to do more to combat the violence.

The Rev. Ira Acree, of Greater St. John Bible Church, said the over 100 shootings and nearly 20 homicides from the past three-day holiday weekend “is totally asinine. This is unheard of, it’s unacceptable, and certainly, we will not bite our tongues.”

They were gathered on the corner of North Long Street and West Washington Boulevard, about half a block from the spot where Chicago Police Department 15th District Commander Patrina Wines and a CPD sergeant were shot in the early hours of July 5.

Wines was shot in the foot and the sergeant was grazed in the leg, according to the Sun Times.

CPD spokesperson Karie James said in an emailed statement both are still recovering but declined to say when they would be returning to work.

“It seems like now, that no one is off limits. a 1-year-old child shot in the head. The police commander, shot,” Acree said.

Marshawn Feltus, a resident and homeowner, said the early Monday morning shooting happened just steps away from his house.

“As a person that cannot be a concealed carry member, how am I supposed to protect myself and my family when the image of a police commander is being shot and hurried off of a block where I rest my head? It’s unacceptable,” he said.

Feltus called on the community to come together to make the 100 block of North Long Street and the surrounding blocks “the prototype for the city of what the community can do.”

Acree said when violence has gotten bad in the past, churches opened their doors to give youth a safe space.

He called on faith leaders who “are in hibernation in your studios, come on out and open those churches up and give these youth a place to hang out and a place where they can be safe.”

Pastor Cy Fields, of New Landmark Missionary Baptist Church, said faith leaders needed to reach out to the community “because our enough has not been enough.”

The pastors said it was also time for politicians to end the blame game and come together to form a comprehensive plan to end the violence.

“We have enough people pointing the finger,” Acree said.

He said he was tired of hearing those in power blame each other. “Don’t just blame, do something.”

The Rev. Marshall Hatch Sr., of New Mount Pilgrim Missionary Baptist Church, said the mayor, county board president and governor need to get out of “their own little cycles” and come up with a comprehensive violence reduction plan for the community.

Feltus said in an interview, while there’s no one answer to solving the violence, “collectively, there’s a number of things that can be done.”

He said elected officials, from aldermen to the mayor, need to start listening to the “little people,” the homeowners and community members who are experiencing these events in real time.

“So, it’s yes, getting the community involved but also in conjunction, if we elected these people then we want to be heard. We want our voices to be heard,” he said.

Feltus said community members want their issues, and their proposed solutions, to be taken seriously.

“If it had not been for the police commander, what type of attention would these residents have gotten so that their voices can be heard?” he asked.

During Thursday’s press conference, a local resident got out of the car she was riding in to ask the gathered faith leaders why no one seemed to be actively trying to inform the community of what was going on.

Feltus said the woman pulling over and voicing her concerns demonstrated a frustration throughout the community: “Those are the things that need to be heard, where’s the public forum to hear these concerns?”

“Don’t credit her, you know, for being angry. Credit her for she’s concerned,” he said.