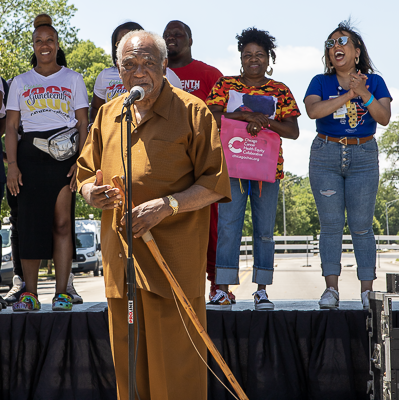 Multiple events were held throughout the Austin community on June 19, just days after President Biden signed a bill making Juneteenth a federal holiday.

U.S. Rep. Danny K. Davis stood on stage in Columbus Park and held up one of the pens used to sign the bill into law. He said he first introduced the resolution to make Juneteenth a national holiday 12 years ago.

“The blues singer was right – Sam Cook – when he said that it may be a long time coming, but change is gonna come,” Davis said.

“When I was a boy, I would be chopping cotton on June 19. As a matter of fact, we would only chop half a day.”

Davis grew up in southern Arkansas during the 1940s and 50s.

He told the crowd that half day off was their acknowledgment of the two and a half years between Lincoln delivering the Emancipation Proclamation and the last slaves in Galveston, Texas, receiving the news of freedom.

Karl Brinson, president of the Westside Branch NAACP, called on the crowd not to let the holiday become merely a symbol but to make it a vehicle for continued change.

“It’s up to us to put some real, serious substance behind this holiday.”

It’s a day for more than just celebrating and taking off work, he said.

The day should be about putting in “some work to advocate, eradicate the things that have been withheld from us,” Brinson said.

“Now we have it, the question is now what we’re going to do with it.”

He said all students should know and be able to explain their history, “because we live off of our history. And we stand on the shoulders of those who came before us.”

It should be more than just barbeques and taking the day off, he said. Having people like Congressman Davis speak and share their history means people understand why they’re celebrating. The day “has to come with both,” he said.

Letrusia May said she’s not new to celebrating Juneteenth.

“Once I really studied and learned about Juneteenth, I told my family, ‘Why are we not celebrating this holiday? We don’t have to wait for someone to give it to us.’”

May said it’s a day of celebrating her ancestors and everything they went through “for us to be here where we are today.”

While she’s happy and appreciative of the day’s new status as a federal and state holiday, May said, “I don’t need permission to celebrate this day.”

To celebrate this year she hosted a pop-up shop at her event space, L. May Creations. She opened the facility to community small businesses, with an eye to those who may not have a brick-and-mortar shop.

“I just wanted to support all of the small businesses in the area,” she said.

She said she came up with the flier just a week earlier and was able to get sponsorship from the Austin African American Business Networking Association, Wintrust Bank and L&S Development despite the short timeline.

“Austin is a great community. It’s a beautiful community, and it’s where beautiful people support you,” she said.