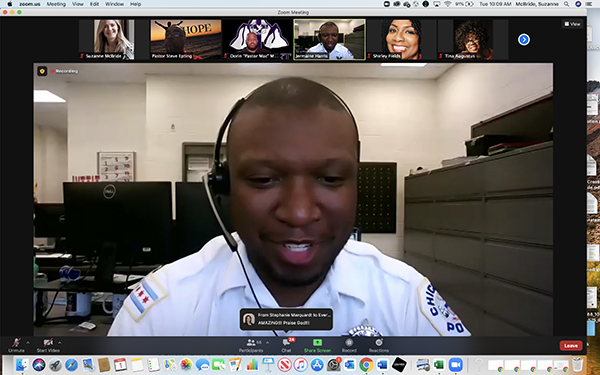 Faith-based leaders and local residents are quietly celebrating an unusual milestone: No one died at the hands of a gun in Austin over Memorial Day weekend.

Sgt. Jermaine Harris of the Chicago Police Department’s 15th District shared the news Tuesday at the monthly meeting of West Side faith-based leaders: “No lives were lost to gun violence in Austin.”

Harris thanked ministers and other faith leaders for being out in the community over the three-day weekend, noting, “It does make a difference, us being present.”

Citywide, four killings and 33 shootings were reported, compared to last year when 10 people were killed and 39 others were wounded, according to the Chicago Sun-Times.

“That is a good way to start the summer – on a downward trend for violence,” Harris said, adding people have to maintain a presence in the community all summer long. “We have to get out there, it’s game time … You are making a difference.”

“This is what it’s going to take to bring violence down and bring neighborhoods up. We have to do even more, we have to get more partners, more boots on the ground … and we have to challenge each other to love each other.”

The key, Epting said, is to create spaces for people to be human again, to socialize, to gather.

Some new places to gather will be available later this month, with outside seating coming to MacArthur’s Restaurant, 5412 W. Madison St., and Coleman’s, 5754 W. Chicago Ave., said Tina Augustus, who’s with the Austin Chamber of Commerce.

And “we’re creating arts and cultural spaces,” Augustus said, adding there will be “beautifully painted” planters made by Austin Artist in Resident Antonio Rupert and her team.

Events also are being planned at MacArthur’s, Coleman’s and in the 5900 block of West Chicago Avenue, now known as the Soul City Corridor.

“We’re working to create activities in different parts of the community so that we can bring more attention to the community,” Augustus said.

A kickoff event featuring the Austin Children’s Choir will be held outside MacArthur’s this Saturday, June 5 at 11 a.m. There will also be a prayer walk through the Soul City Corridor starting at 12 p.m. at the corner of Chicago and Central.