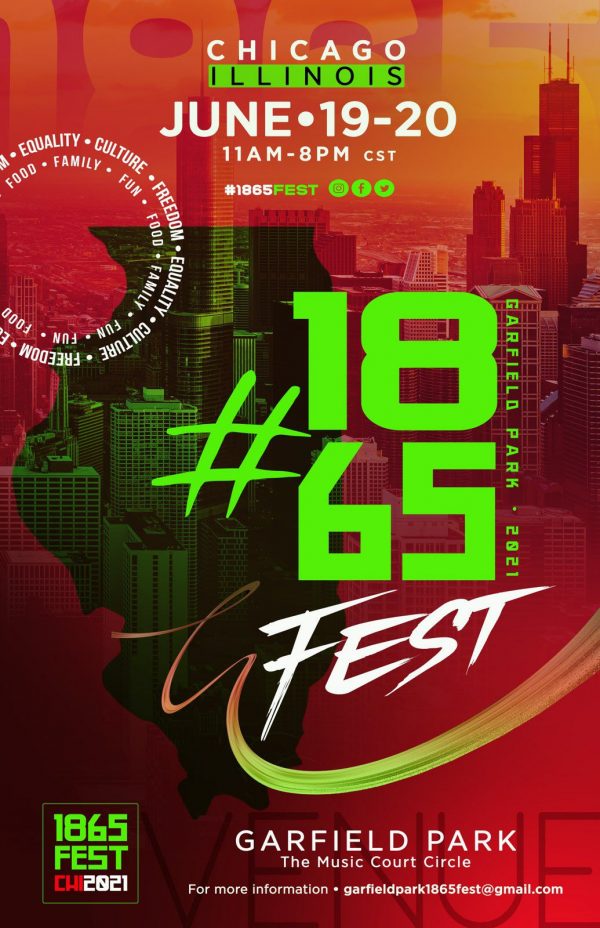 With Juneteenth fast approaching, events are popping up all over the city – including on the West Side – to commemorate the end of slavery in Texas.

On Friday, June 18th, residents can join a “caravan march” that starts at Malcolm X College, 1900 W. Jackson Blvd., and ends at the A. Philip Randolph Pullman Porter Museum at 10406 S. Maryland.

This week of culturally-relevant dialogues and activities has been organized in partnership with the Black United Fund of Illinois, the Black Remembrance Project, The Maafa Redemption Project, META 24, Legacy Health and Wellness Foundation, and Firebrand Arts Network.

LaCreshia Birts, co-chairwoman of the Black Remembrance Project, has been pushing for Juneteenth to be recognized as a city and state holiday since 2019.

Cook County became the largest county in the country to make Juneteenth a paid holiday for government employees. The state currently observes Juneteenth on the third Saturday of June, but it isn’t yet an official state holiday.

Birts finds this disrespectful, noting how July 4th is celebrated on its day rather than being relegated to a weekend.

Juneteenth commemorates June 19th, 1865, when slaves in Galveston, Texas, received the news they were free. Although President Abraham Lincoln signed the emancipation proclamation in 1863, this news didn’t reach the Texas town for another two years.

Texas became the first state to make Juneteenth an official state holiday in 1979. Today, 47 states and the District of Columbia recognize Juneteenth as a state or ceremonial holiday.

Legislation recognizing Juneteenth as a state holiday unanimously passed in the Illinois House and Senate in late March. Once Gov. J.B. Pritzker signs the bill, it will take effect immediately, making June 19th a paid day off for state workers and a public school holiday.

Garfield Park is holding its first annual 1865 fest this year. Spearheaded by Carol Johnson, the three-day event will be held June 18th, 19th and 20th from 11 a.m. to 8 p.m. in Garfield Park’s music court circle.

There will be free food available from local eateries, vendors from West Side businesses such as Tops and Bottoms, culturally-oriented activities like hair wrapping demonstrations, hair braiding stations and even a spades tournament.

On the last day – Sunday, June 20th – a vaccine truck will be available for those who are not yet vaccinated for COVID-19.

Johnson said in previous years, different organizations held their own separate events, so this year the community wanted to come together as a collective to do one big event.

The event will be following CDC guidelines and enforcing mask-wearing for all attendees.

Activities and discussions, organized by the initiative – a collaboration of Cook County, the state of Illinois and the city of Chicago – will focus on justice, culture, education and other topics.

On the actual holiday, June 19th, the Cook County Juneteenth Planning Committee has organized a March For Us 2021, with marchers traveling from 701 S. State St. to 50 W. Washington St. to bring attention to systemic racism and unfair policing practices.