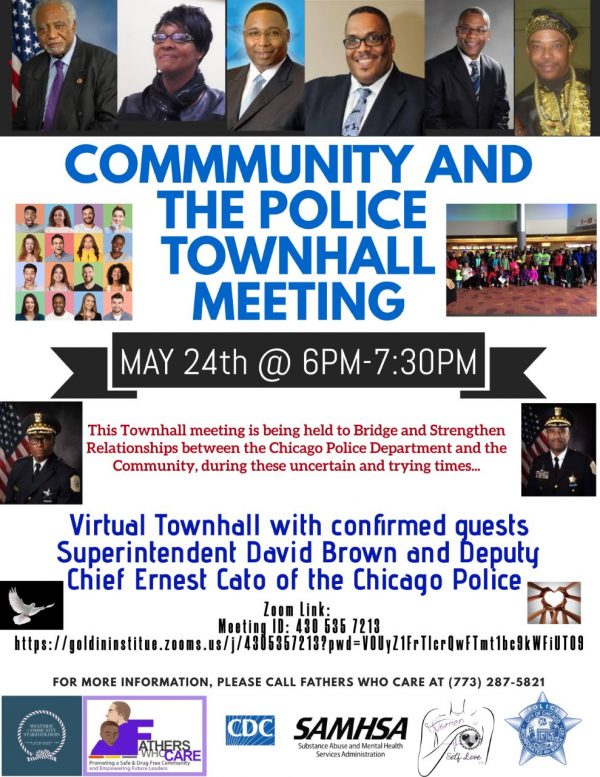 West Side elected officials and local residents met earlier this week with the goal of promoting a healthy relationship between police and the communities they serve.

Nearly 90 people logged into Zoom to hear how the police to build stronger connections with residents.

Many of the concerns residents raised in the chat were about youth safety, an increase in gun violence and police accountability.

Brown said the Chicago Police Department is ready to engage with the community much more this upcoming summer, with Monday’s town hall being a first step. Once the pandemic is over, the superintendent plans on meeting with residents in person.

In terms of officers being held accountable for unlawful actions, Brown referenced a federal consent decree that requires the police department to make reforms.

The aim of the decree, which the city entered into with the U.S. Department of Justice, is to address patterns of police violence perpetrated against people of color and people with disabilities. The goal is to promote transparency, increase law enforcement accountability and build trust among Chicagoans and the police.

The consent decree signed by a federal judge in early 2019 is more than 200 pages and describes how CPD needs to put safe and constitutional policing practices in place, the superintendent said.

Under the decree, officers are required to document incidents in which they point their guns while serving a search warrant; other polices such as how and when to pursue suspects also must be put in place.

It expands emotional support for officers as well, increasing the number of clinicians available. “In order to change the culture, officers have to be mentally well to do it,” Brown said.

Officers are responsible for changing the norms around policing, he added. In order to help accomplish that, the department has hired social worker Alexa James, CEO of the National Alliance on Mental Illness/Chicago, to advise him on policy and programs including an officer support group, another requirement of the consent decree.

The superintendent said officers have already been making strides in building trust with the residents they serve. They’re working with local nonprofits and organizations to address neighborhood concerns and supporting businesses recovering from civil unrest and COVID-19.

Citing lack of racial inclusivity on the force as an ongoing problem, Brown is urging young people of color to join the police academy. He said diversity on the 12,ooo-person force is needed now more than ever so that residents are policed by people from their community and by those they can identify with.

“Diversity will be how we reform the culture,” he said.

CPD has a goal of opening three more academy application periods this year – in June, August and November. Recruitment officers have been going to colleges, job fairs and military bases to encourage more minority applicants.

Last week, Chicago saw its deadliest weekend 0f 2021 with a good share of the violence concentrated on the West Side. Brown told WGN youth need to be given an alternative to violence.

Similarly, Cato’s main concern is youth safety. The deputy police chief said part of the reason for an increase in gun violence on the West Side is a lack of resources available to residents. “An increase in resources will result in a decrease in crime.”

Cato also mentioned the addition of an officer dedicated to providing resources such as food and care to homeless community members as well as hiring youth coordinators throughout the city.