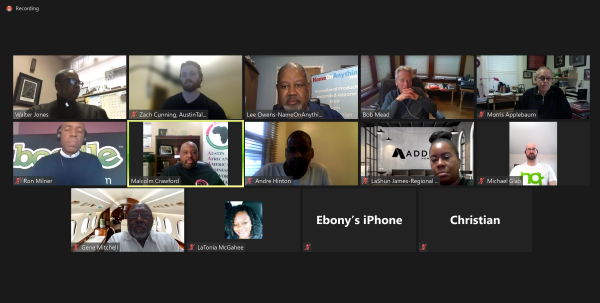 Loretto’s embattled CEO and president took full responsibility for the COVID-19 controversy that has engulfed the hospital at a meeting of West Side Men’s Network this week.

“First, I take 100% responsibility for all the decisions that were made around where and who we distributed vaccinations to,” George Miller said Tuesday. “We absolutely made mistakes along the way. I cannot deny that, nor do I deny that to you today or to anyone else.”

Block Club Chicago first broke the news in mid-March that Loretto had vaccinated dozens of workers at Trump Tower, where former COO and CFO Anosh Ahmed owns a condo.

Since then, other cases of Loretto vaccinating people outside of Chicago Department of Public Health rules have come to light. Employees at a Gold Coast watch shop frequented by Ahmed, members of Miller’s suburban church and Cook County judges, among others, all received vaccinations in violation of local health department rules.

The stories triggered an investigation by the city, the resignation of Ahmed, Rep. La Shawn K Ford’s decision to step down from the hospital’s board of trustees and the mayor cutting off Loretto’s vaccine access.

At Tuesday’s virtual meeting, Miller said Loretto is “currently still doing vaccinations” and will know on Friday if they will be receiving new vaccine supplies. He said the hospital is working with the city to ensure Loretto’s program “meets every standard possible.”

As part of that, the board directed Miller, who is being reprimanded with a two-week unpaid leave, to conduct an internal audit “to learn what we’ve done correctly [and] what we’ve done incorrectly,” he said.

Miller expects the audit to be completed in the near future and said it will be shared with the city.

“It saddens me that we did all the work and now have to rebuild trust with the city,” he said. “We learned that we have to be more transparent and responsible, take action when the situation requires.”

The hospital will be working with a PR firm to engage with the community and rebuild trust, Miller said.

To date, Loretto has conducted over 23,000 COVID tests and administered over 16,000 vaccine jabs, he said.

“Eighty-five percent of the disposable income of Austin goes to Oak Park,” between $150 and $180 million, he said. “Our work has been around bringing that energy and bringing those dollars back to the Austin community.”

One major challenge is a lack of sit-down restaurants.

Crawford said when people want to grab lunch, it’s, “’OK, let me take you to Oak Park.’ It’s kind of hard to have a conversation with people when you got to take them out of the community.”

At least two sit-down restaurants are expected to open along corridor in the near future, he said.

Batter and Berries, a café in Lincoln Park, will be opening a location in the 5900 block of Chicago Avenue. The location will include outdoor seating and contain an additional event space known as The Bruce.

“They have a very aggressive timeline,” Crawford said.

The restaurant is expected to open toward the end of summer.

The second sit-down restaurant, Brown’s Soul Food, will be opening at 5847 W. Chicago Ave. in about six weeks, Crawford said.

There is also the possibility of a coffee shop coming to the Soul City Corridor, as well as a location for Majani, a vegan soul food restaurant that already has three other locations throughout the city.

“I went there the other day, it’s phenomenal. The barbeque cauliflower was just to die for,” Crawford said.