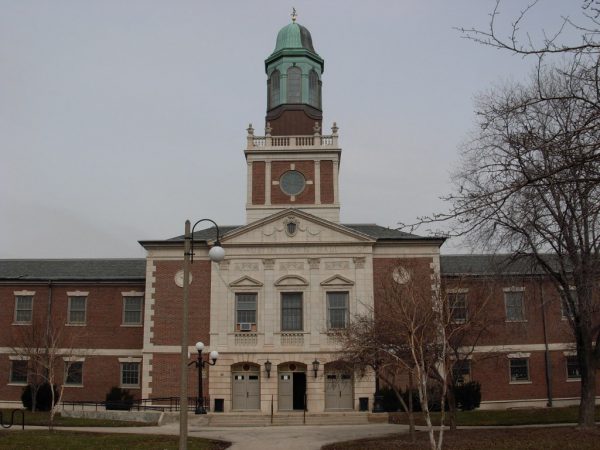 The money will partially cover costs associated with upgrading the town hall’s electrical service, improving ADA access, and remodeling and restoring parts of the interior including the auditorium, said Beth Tomlins, deputy chief operating officer for the Chicago Park District.

She said there is extensive water damage to parts of the building’s interior finishes, and masonry and roof work is needed.

The project’s total cost is at $2.4 million, Tomlins said.

It’s not clear where the remaining $900,000 will come from. Ald. Chris Taliaferro (29th) and the Chicago Park District did not respond to requests for comment.

Ald. Taliaferro, whose ward contains the town hall, said during a Finance Committee meeting last week the building is a valuable part of the Austin community that’s “been deteriorating for a while.”

He said while some money was allocated in 2018 to renovate the locker rooms and pool, as well as parts of the exterior, the rest of the town hall is still in dire need of repair.

“We need to preserve this landmark,” he said.

Vanessa Stokes, co-president of the Austin Town Hall Park Advisory Council, said the site “gives us a place where we can commune and have conversations and be with each other.”

Having this space is especially critical now and because there aren’t many other spaces like this for Austin residents to come together.

“Having a facility that’s up to par, I think that makes a difference for the Austin community,” she said. “After all the years of disinvestment, it just shows the city’s commitment to investing in the community.”

The building, at 5610 W. Lake St., was once home to the Cicero Town Hall; the original structure was built in 1870, when Austin was still part of Cicero township, according to the park district website.

After Austin’s annexation by the city of Chicago in 1899, the old Cicero Town Hall became a police station and library, as well as a place for other public functions.

A library and field house were commissioned to be built on the site in 1927, and the Cicero Town Hall was razed in 1928 to make room, according to the Chicago Tribune.

The field house opened in 1930 and was modeled after Philadelphia’s Independence Hall. The same architects designed fieldhouses for Humboldt and Douglas Parks and the Gold Dome Building in Garfield Park.

Austin Town Hall was added to the national register of historic places in 2006 and is one of 18 neighborhood cultural centers in Chicago.

The facility today is used for everything from summer camps to political events, and it provides performance and rehearsal spaces for local artists.

The town hall is also slated to receive $60,000 in funding for an outdoor fitness course. The project is one of six throughout the 29th Ward being funded in the latest participatory budgeting cycle.

The renovations will “make this a more viable space for our children to come and utilize, as well as continued adult use and elected official use,” Ald. Taliaferro said.