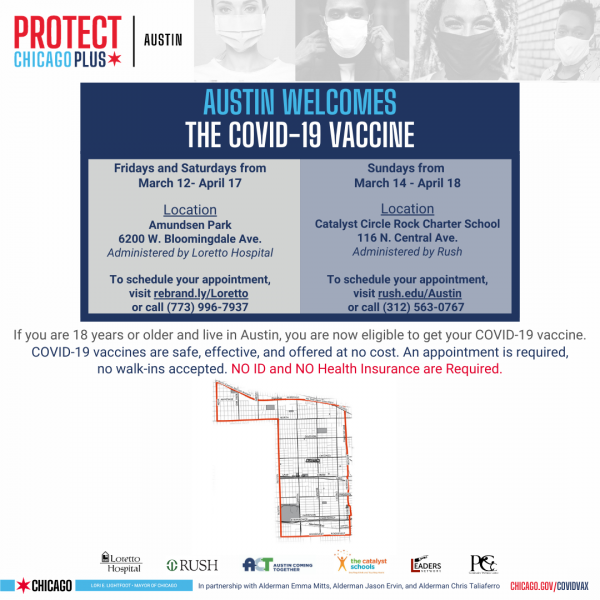 The alderman said while there have been block club meetings throughout the ward during the pandemic, he wants to get back to consistent ward meetings and “matters that are more centrally ward focused, so we can get information out to our constituents on a broader basis.”

At this month’s virtual meeting, which was attended by 16 people, residents heard from a representative with Protect Chicago Plus concerning vaccines in Austin, and had the opportunity to air concerns and ask questions about what’s going on in the ward.

Gaby Wagener-Sobrero, who does community outreach for Protect Chicago Plus, said the city is “doubling down” on its efforts to get the vaccine into communities hardest hit by COVID-19.

“A really unique feature of Protect Chicago Plus is the fact that we’re coming into communities and vaccinating folks in those communities,” as opposed to residents having to travel long distances to find a vaccine, she said.

Austin is one of 15 communities that has received a temporary vaccine clinic through the city’s program. Each community received doses equivalent to 10% of its population.

The city chose those communities by assembling a vulnerability index and seeking to identify areas disproportionately impacted by COVID that also have barriers to receiving the vaccine.

Community areas were scored in four categories – sociodemographic, epidemiological, occupational and cumulative COVID burden – then ranked as high, medium or low in vulnerability.

All 15 communities selected for Protect Chicago Plus clinics were ranked high, Wagener-Sobrero said.

In Austin, all residents over 18 are eligible to get the COVID-19 vaccination.

Clinics are being held the next weeks in the Amundsen Park gym, 6200 W. Bloomingdale Ave., and run by The Loretto Hospital, and in the Catalyst Circle Rock Charter School gym, 116 N. Central Ave., and operated by Rush University Medical Center.

You don’t need to show ID or have health insurance, but the program does require proof of residency, such as a piece of mail, Wagener-Sobrero said.

“We want to make sure that in this case for Austin, the vaccine we’ve allocated for Austin residents really goes to residents,” she said.

They’re still thinking about what next steps will look like once the temporary sites wrap up. “We recognize it’s not enough to just come in, temporarily set up a shop and then leave,” Wagener-Sobrero said.

She said the focus would stay on community collaboration and getting more vaccine into the most vulnerable communities.

“[This is] an interesting kind of pivotal moment where we’re now thinking, ‘OK, so what are we going to do next?’ And it is a little bit of an exciting time,” Wagener-Sobrero said.

Ald. Taliaferro said there are still many ward residents concerned about taking the vaccine. Whether someone gets the vaccine, he advised that everyone “still practice those precautionary measures that’s been passed along by the CDC … It’s important to keep yourself safe and your family safe.”

One resident, identified as Gloria, said she was concerned residents aren’t consistently getting information about what’s going in the ward, including vaccine availability.

“When were we notified about vaccine in the area?” she asked. Gloria said she “found out by accident” about vaccine opportunities.

Taliaferro said the ward staff had sent out e-blasts and emails, and posted on Facebook about the vaccine opportunities, as well as calling a lot of the ward’s seniors directly.

“I was asking folks to share it as best as possible and as much as possible,” he said.

The alderman said he thinks it’s important for the ward to start distributing a physical newsletter to reach residents who may not know about the digital option, or don’t have access to a computer or the internet.

Currently, the email newsletter is “probably reaching out to no more than 2,000 people,” he said. The 29th Ward has about 55,000 residents according to its website.

Sending a single physical newsletter would cost between “$9,000 to $10,000,” the alderman said. “We’re very limited with how many times we could do it on an annual basis. So we do rely on spreading the word of mouth,” in addition to electronic communications.

Residents can also stop by the ward office at 6272 W. North Ave.

Ward staff are back in the office, from 9 a.m. until 5 p.m., Monday through Thursday. “We are here to serve you,” said staffer Byron Watson.

“Just stop by,” said the alderman.