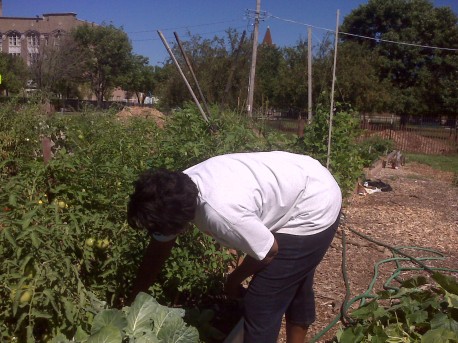 Shawn Feemster took a step back and marveled at the bounty of tomatoes, collard greens, tomatillos, green peppers and cabbage that came up in Sheila Means’ garden.

“This is making me hungry. I want to pick some of this and cook it,” Feemster said of her aunt’s crop. 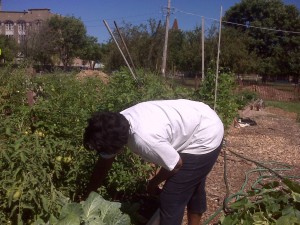 For Means, elated by the results of her first-time effort, the hard work will become a way of life.

“I’m going to try planting broccoli once the cabbage is harvested, and I’m starting to think about what I’ll plant next year,” said Means, beaming.

Means and Feemster were amongst more than 60 people who joined together Sunday to dedicate the new creation in Austin, the Harambee community garden at 500 N. Waller, just around the corner from Austin Town Hall. 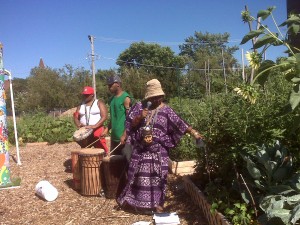 Towering sunflowers, vines of tomatoes and other growing plants served as a backdrop to the prayers, libations and thanks.

The celebration focused as much on the garden as it did on the growing partnership between the community, the Root Riot Urban Garden Network and Frederick Douglass Academy High School, which is located just across the street from the garden.

Students played a large role in making the project a success.

They helped convince the owner of the property to donate the land, prepare the ground, build the beds, name the garden and put their muscle into making this garden happen. They loved taking part because of what the project came to signify for them.

“Thank you for giving young people a chance to do something different,” said Deandre Robinson, a student leader of the project. “We need more positive experiences like these, and we’ll continue to rally our classmates to make it happen.” 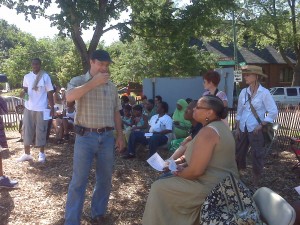 Ald. Deborah Graham (29th) said this was the start of a new direction for the neighborhood.

“We can help get people into the habit of healthy eating. There would be no food deserts in the area if people could grow their own,” said Graham as she looked over the progress of her own garden filled with tomatoes, carrots, cabbage, peppers and string beans.

Thirty-five plots were created this spring; organizers are hoping to double or triple that number next year. 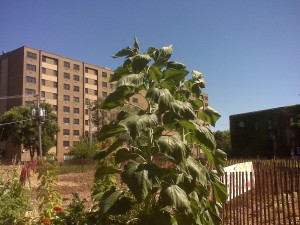 As the garden grows it will continue to be an example of the meaning of the Swahili word Harambee, all pull together, said Root Riot co-founder Seamus Ford.

“We’ve created something that gives the community a reason to know one another. It’s a public space where people – students, teachers, adults, passers-by – can talk about raising food. It’s going to be an example for some time to come.”